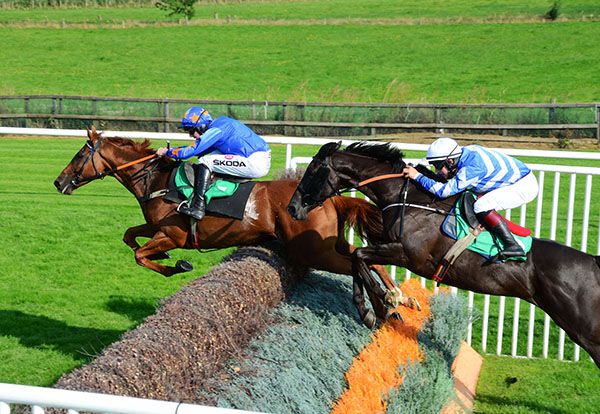 Cushinstown Finest was still in there pitching at the final fence but it was fairly evident from Mark Walsh’s body language on The Trigger, that Colin Bowe’s mare was fighting a losing battle.

Under top-weight the Ronan McNally owned and trained successful Beneficial gelding eased on to register a four and a quarter length win.

McNally said: "We are in the mix for six now!

"We got him about three years ago and he was very sick when we got him. He won a few for us in between times but he used to bleed. We used to call him 'Trigger the frigger' but now we call him 'The Triggernator!"

"We let him run 70 percent fit at Tipperary and he got in front and just from then he has snowballed. He won at Kilbeggan then and after Kilbeggan he is transformed and just a different horse - he thinks he owns the yard. He is walking around with a swagger and winning more impressively every time. We don't know where it will stop to be honest.

"We take him home and he doesn't miss a nut. It used to be when we ran him he used to be slow at his food and he is a greedy horse so you knew that he was feeling the effects. He'll not miss a nut now and he is roaring at you.

"If he's in the same form going home today we'll have a look, it might be two weeks or it might be three weeks. You might never get him in that form again as he is 11.

"We try hard, we keep a small team and we keep them right and any money we need to spend on them we do it.

"The plan is week to week, but after he won in Tipperary me and Sean Flanagan talked about if we could get him up the handicap a bit he could go for one of the handicaps over the National fences at Aintree in spring because his jumping is outstanding. That's probably the long-term plan. There's a lot of steps to get him there but you can dream anyway.

"Mark (Walsh) said he relaxed better and he jumped well. When he got daylight he said he was away. He's a dream ride for a jockey.