Toshizou toughs it out at Tipp 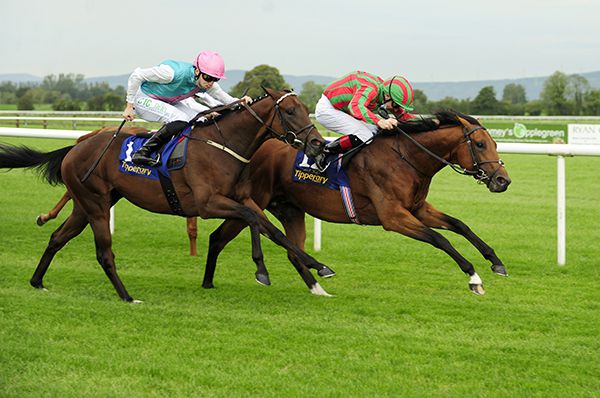 The Joseph O'Brien-trained Toshizou held the late charge of Baseman to get off the mark on his second outing in the opening Camas Park Stud Maiden at Tipperary this afternoon.

Declan McDonogh soon had the 10/11 favourite tucked in behind the leaders from his wide draw and he was produced to challenge over a furlong out.

The son of Galileo got his head in front inside the final furlong but had to repel a strong finish from newcomer Baseman, who got within a head at the line.

Toshizou had been a promising third to Masen on his debut at Leopardstown back in July.

"He had a bad draw but is a typical Galileo and is tough as nails,” said assistant Brendan Powell.

“I think the second is going to be very nice, having missed the break and been murdered (short of room early on) but experience has got our horse there.

"Declan said he travelled well, had a nice position and galloped the whole way to the line.

“You'd say he is a middle distance horse for next year, is a beautiful looking horse and is a fine mover. That ground was ideal for him too."

Gotthenod provided Dot Love with a second success in as many days, as she ran out a comfortable winner of the FitzpatrickPromotions.ie Mares Handicap Hurdle .