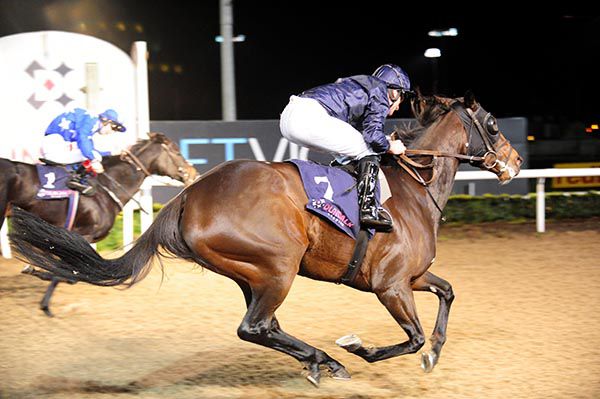 Tracing completed a Dundalk treble for Aidan O'Brien as she just prevailed in the concluding Crowne Plaza Hotel Dundalk Handicap.

Earlier successful with Yale and Vatican City, O'Brien saddled two in this mile and a half contest, with Seamie Heffernan aboard the winner who was returned at 12/1.

Without a win in nine previous starts, the daughter of Galileo was upped in trip this evening and raced in mid-division.

She was pushed along in fifth on the approach to the straight but soon came with her challenge on the outer.

Inside the final furlong it was difficult to know who was in front with the runners wide apart, but come the line Tracing had done enough to see off Cache Queen by a head.

The runner-up, who was beaten by just a nose at the venue on Friday, was ridden by Colin Keane for Adrian McGuinness and she was returned the 13/8 favourite.

Ally Cay (25/1) completed the placings another half a length back in third, with Conor Maxwell aboard this one for Gavin Cromwell.

"She has plenty of ability. There is plenty of improvement in her," said Heffernan.

"The trip will improve her a fair bit. It's not a surprise she's won as she's always worked like she was better. The step up in trip, I'd say, was a good help."

* The Irish Horseracing Regulatory Board Veterinary Officer examined Watchman, trained by Denis Gerard Hogan, at the request of the Stewards and reported the animal to be post race normal.

* D.E. Sheehy, rider of Jess's Corner trained by T.G.McCourt, reported to the Clerk of the Scales that his mount hung badly left all the way.