Twomey aims to move through grades with Moll 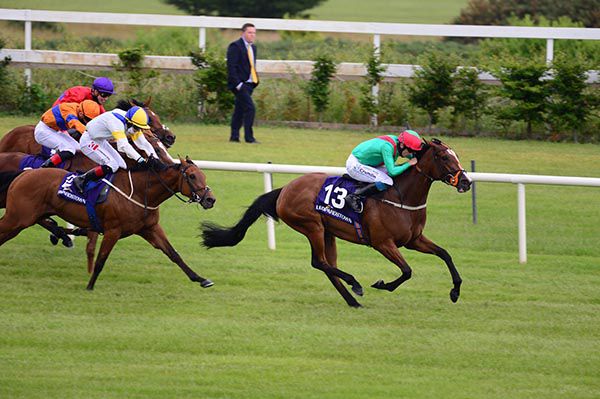 Moll was a warm order on her first start for Paddy Twomey and the market got it right in the Leopardstown Handicap over a mile and a quarter.

She soon held a good position behind the leaders in sixth in this big field, before making her move with less than three furlongs to negotiate.

The Camelot filly loomed large on the outside under a quarter of a mile out and was given the office by Billy Lee to go for home.

She hit the front with over a furlong to go and looked to have the race won in the closing stages, however, Marchons Ensemble absolutely rattled home to close to within half a length at the line.

The 9/4 favourite was value for his winning margin but the 13/2 runner-up certainly went into plenty of notebooks.

Sacramento was third at 10/1, beaten a length and a quarter by the winner.

Trainer Paddy Twomey said: “Team Valor bought her and she came to me about ten days after she won in Dundalk. She’s a nice filly and was just ready to run today. I think she’ll progress.

“It looked a nice spot to start and thankfully it worked out. She’ll have no bother stepping up in trip.

“We’ll see what the handicapper does but she has the ability to go into Stakes company. Her owners are game and I’d imagine they would like to travel with her in time.

“They have a good syndicate and they are focusing very much on European racing and luckily Irish racing.”

Moll won a mile maiden at Dundalk on her last start for Mark Cahill in January. That race has thrown up several subsequent winners.