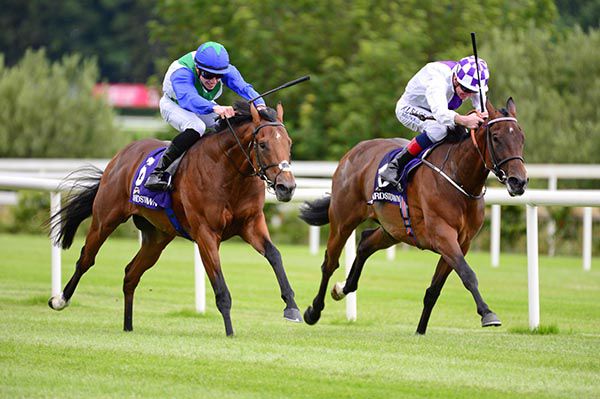 Vafortino (left) battles it out with Meala
© Photo Healy Racing

Fourth on his first start at Proudstown Park, the Joseph O'Brien trained colt ran short of room in the closing stages on that occasion before finishing out his race well.

Sent off an 11/2 chance today, the son of New Bay broke smartly from his wide draw in stall 15, soon improving to dispute the lead with Meala.

This pair skipped a few lengths clear over a furlong out and despite Vafortino briefly drifting right inside the final 100 yards, he was quickly straightened up by Shane Crosse, going on to prevail by half a length.

Meala (7/2) had to settle for second under Kevin Manning for Jim Bolger, while newcomer Ebeneezer Perry (6/1) made late headway to take third, a further three lengths back under Colin Keane.

The Jessica Harrington trained Noble Seal was sent off the 15/8 favourite and he finished a disappointing seventh.

Brendan Powell, assistant trainer to Joseph O'Brien, said: "He's improved from his first run. Shane said he was a bit keen early on but he stuck at it well. He's still babyish but he has a nice engine.

"He picked up well and Shane said he galloped past the line and he had a job to pull him up afterwards. Hopefully he could be smart."

* R.C. Colgan, rider of Montenotte (GB) trained by John Joseph Murphy, reported to the Clerk of Scales that his mount was slowly away.

Cayenne Pepper will lead a three-strong team for Jessica Harrington at next week’s Breeders’ Cup.