Ward hoping for big year ahead with Kimari 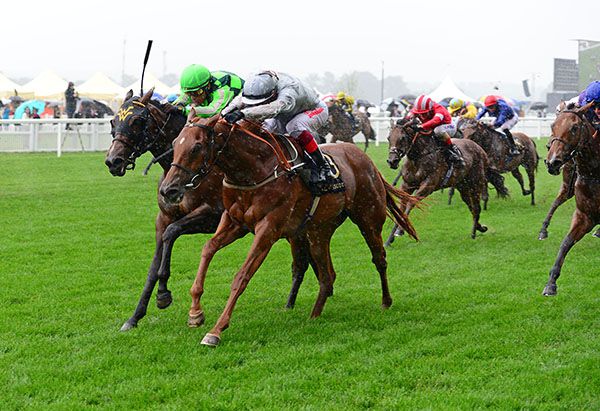 Wesley Ward plans to work back from the Breeders’ Cup Sprint with Kimari following her impressive return to action at the weekend.

The three-year-old confirmed her versatility with a smart performance on a sloppy dirt track at Oaklawn on Saturday, her first outing since finishing fourth to unbeaten stablemate Four Wheel Drive in the Breeders’ Cup Juvenile Turf Sprint at Santa Anita in November.

Ward’s charge found the Frankie Dettori-ridden Raffle Prize just a head too good at Royal Ascot last year and while plans for this year’s Royal meeting are very much dependent on when and how racing resumes in Britain, the Commonwealth Cup is a race her trainer would like to target, if possible.

He said: “I was excited for the horse, she won on a sloppy track so now she’s won on nearly every surface, with the exception of Polytrack, although she had a fantastic work prior to this at Turfway Park on the Polytrack, so she can really go any surface.

“At Ascot she ploughed through it (rain-softened ground) and take nothing away from my rider that rode her that day Johnny V (John Velazquez), but if I’d had my rider Frankie on I wouldn’t have had to beat him!

“Now she has got a race into her we’re hoping to get to Ascot and the ultimate goal is Keeneland, where I train her — that’s her home course and we’ll go for the Breeders’ Cup, for the sprint on dirt.”

Four Wheel Drive had been due to make his three-year-old bow at Keeneland’s cancelled spring meeting.

Ward said: “He was due to run last week, so we’re kind of on a holding pattern.

“Keeneland had an opening-day stakes race for him, but Churchill does as well, they have the William Walker on opening day there. That meeting has obviously been cancelled, but hopefully when they get going they will still have that race and we’ll be ready to go. We’re hoping that race will be his first start of the year.

“He’s never really shown the affinity for dirt that Kimari has — he’s worked a couple of nice works and being a Breeders’ Cup juvenile sprint winner you would see that, but the longer he went on dirt the more he slowed down, which is usually what turf horses do, they can’t quite get hold of it.

“We were looking at the King’s Stand, but again the main thing is to talk to the owners and make a team decision where we go.