Well-bred and well-backed Caravation off the mark over fences 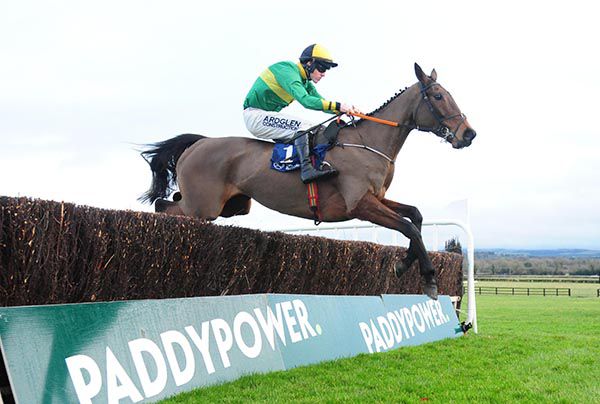 A sister to 2009 Irish Grand National hero, Niche Market, Caravation today got off the mark over the larger obstacles in the Irish Stallion Farms EBF Mares Beginners Chase at Naas.

Billed as a match between the William Flood owned and bred Caravation (13/8 into 6/5 second favourite), and Good Thyne Tara (4/6 out to 4/5), the two miler went that way out on the track.

Not surprisingly Good Thyne Tara seemed to have a bit more pace between fences than Caravation. The favourite was in front, but the outcome was far from decided, when she fell three out.

That really only left the last two fences between Caravation and victory. Under Brian Hayes Philip Dempsey’s charge accomplished success by nine lengths from Goodnightngodbless.

“We got the rub of the green. The other horse was travelling well at the time and there was still all to play for,” said Dempsey.

“We're delighted with the way she jumped today and you couldn't have asked for any better really.

“She had the experience and we're delighted to get off the mark.

“We might look for a winners of one before pitching her in at the deep end. We'll stick to mares races if we can.”

Bellewstown this afternoon is now Good, Good to Yielding in places following 12mm of rain overnight. There is some more light rain forecast for late afternoon.