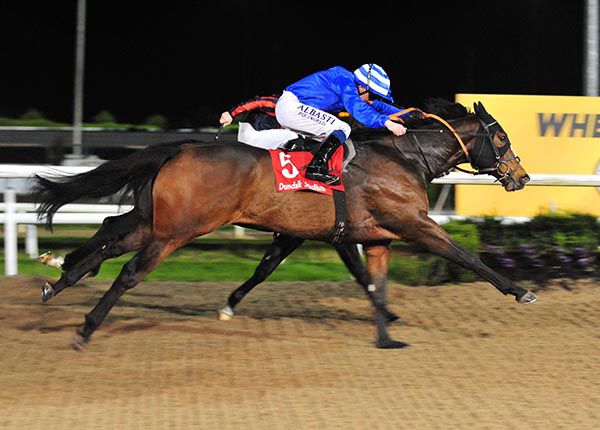 Just the minimum margin of a nose split them as Alfredo Arcano emerged victorious from Aggression in the opening Dundalk Stadium - Light Up Your Night Handicap.

The David Marnane-trained and Chris Hayes-ridden Alfredo Arcano (3/1) marginally prevailed at the line after Aggression finished off well after being switched left to deliver his challenge.

"He's a lovely horse. We were going to send him to the Horses In Training Sale but we just felt there were a few good opportunities here over the winter. There is a 25 grand handicap over six here in four weeks time that he will come back for," explained Marnane.

"For a three-year-old to do that is pretty good. He's been a bit free going like a lot of sprinters and we spent that much time getting him relaxed that we had to change it up a bit. We needed to make a bit more use of him as he has a huge stride. I think he's grown up now."

D.P. McDonogh, rider of Togoville trained by Anthony McCann, reported to the Clerk of Scales that his mount missed the break having laid down in the stalls.

Coleman set for spell on the sidelines

Aidan Coleman will be out of action until October having fractured his arm in a fall at Southwell on July 30.