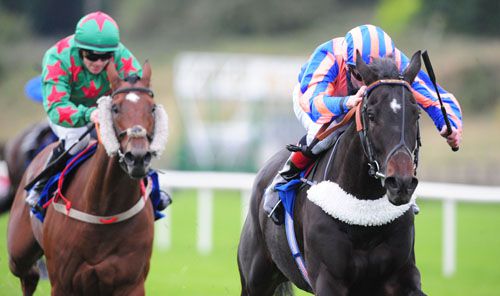 In My Pocket gave weight and a beating to his three rivals in the 19 Euro Munster Madness Race at Limerick.

John Oxx's 1-4 favourite looked a cut above on official ratings and so it proved, eventually leaving The Ice Meister toiling before recording a four and a half-length success under Declan McDonogh.

McDonogh made it a double on the day when guiding Nigel Carolan's Last Garrison (10-1) to a length and three-quarter success over Ondamoura in the first division of the Ladbrokes Munster National Tomorrow At Limerick Handicap.

Third Dimension showed his love of testing conditions when making all to run out a convincing winner of the competitive McMahon's Munster Mile Handicap.

Ger Lyons' 9-2 favourite was always in command and after streaking clear at the furlong pole, he was kept up to his work by Colin Keane, beating Canary Row by a length and a half.

A Year To Remember ran out a game winner of the McMahon's Supporting Limerick Community Games Maiden for Aidan O'Brien.

The trainer's son Joseph had to be at his strongest to repel his rivals in the closing stages, but the line came in time for the 5-2 chance as he had half a length in hand of favourite Almanaara.

O'Brien's double came when his daughter Ana drove Along The Shore (9-2 joint-favourite) home in the second division of the one-mile-three-furlong handicap.

Sheila Lavery's Sevenleft made all the running to land the Irish Stallion Farms EBF Auction Maiden.

The 5-4 favourite burst out of the stalls in front under Pat Smullen and never looked back, gradually winding up the gallop in the final two furlongs before pulling three lengths clear of Hasselknot.

Patrick Martin's No Way Jack (7-1) squeezed between rivals to land the Best Of Luck To Patrickswell GAA In The County Final Apprentice Handicap under Denis Linehan, while the Keanes Ladies Day Tomorrow Nursery Handicap went to Johnny Feane's Bulgadin Lady (14-1) under Gary Carroll.