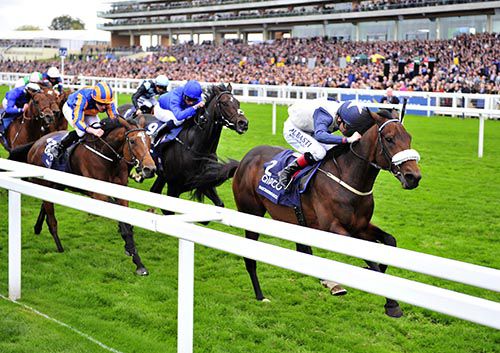 Fascinating Rock ran down Jack Hobbs to spring a surprise in the Qipco British Champion Stakes at Ascot.

Jack Hobbs, the Irish Derby hero, looked like collecting from his wide draw when he hit the front early in the straight after taking over from his pacemaker Maverick Wave.

However, the evens favourite pricked his ears and did not open an immediate advantage.

Pat Smullen delivered the 10-1 winner with a telling run to lead inside the final furlong and Dermot Weld's four-year-old went on to take the mile-and-a-quarter feature by a length and a quarter.

Found stayed on from the rear to claim second place, half a length ahead of Jack Hobbs.

Smullen said: "Our horses fly around here. I think he has been an underestimated horse, the ground and everything else was right for him today.

"They went fast, there was a good ease in the ground and 10 furlongs is his right trip.

"He's a very good horse and is improving all the time, you can see how big he is - he can only improve.

"I wanted to be closer than I was, but they went so fast so I sat back and decided to take my chances."

Weld said: "This has been the plan for about six months. This was the race I thought would suit him best.

"Usually the ground is on the slow side. He loves it soft and he's a very good horse in the autumn.

"He was very good at Leopardstown when he won by six lengths and I think he'll make a lovely five-year-old.

"Hopefully he'll be back here next year to defend his title. I'll talk to the owner and see what he thinks."