Galway brace for Meade and Flanagan 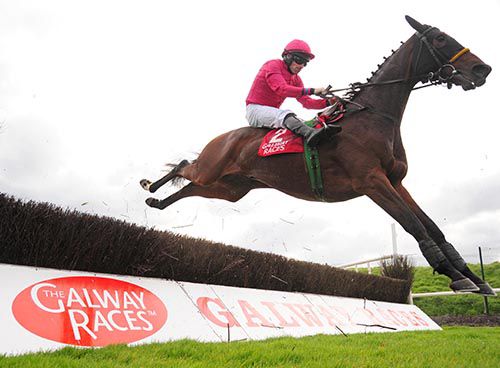 For a time it looked as if Marinero would jump them silly from the front in the Ryans Cleaning Chase, but Monksland has plenty of class which he showed to bring up a double for Noel Meade and Sean Flanagan at Galway.

Captain Von Trappe was the chief among the three, to attempt to keep tabs on the David Mullins-ridden favourite Marinero (evens).

However, despite not fencing quite as well as the 'jolly,' Monksland (6/5), back off a 248 day break, went into overdrive in pursuit of the pace-setter from before the straight.

What ensued was a tremendous battle between Marinero and Monksland up the straight, which the latter eventually edged by a head.

Meade, earlier a winner with the impressive Le Martalin, revealed in the aftermath: "He nearly put me out of commission before the start as he gave me a kick in the stomach, but luckily enough there is plenty of padding there!

"I'm thrilled with him as he really was just three quarters ready. The race was there and I thought we won't get as good a chance to run him again before the north.

"He made a few errors and if he could rule them out it would be great. He just lacks a bit of scope and he is not easy to train. He swims a lot and spends a lot of time in the spa, but when he is right he is not a bad horse. He might run over hurdles again at some stage, we'll see how the season goes."

The Stewards interviewed D.J. Mullins, rider of Marinero, concerning his use of the whip in this race. Evidence was heard from the rider concerned. Having viewed a recording of the race and considered the evidence the Stewards were of the opinion that the rider was in breach of Regulation 10.4, in that he used the whip without giving his mount time to respond and having considered his record, suspended him for one race day.