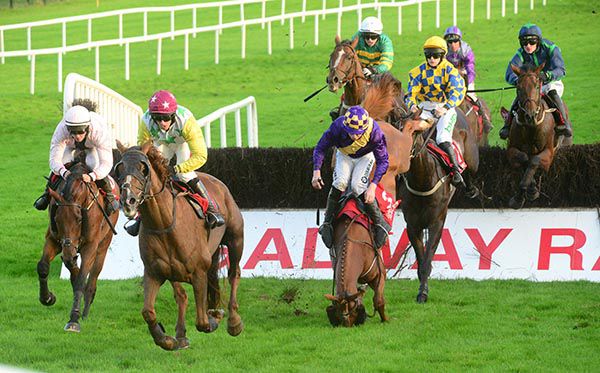 It was gamble landed with Wake Up Early as the Francis Flood-trained gelding claimed the Kenny Developments Handicap Chase at Galway.

The JP McManus-owned gelding had been well-beaten in two beginners chase runs earlier in the year but was well supported, from as big as 20/1 in the morning, into 13/2 making his first start in handicap company over fences.

Donie McInerney held the Doyen gelding up in the two-mile-six contest and had to sit tight as he made a mistake four from home.

He started to make ground up going to the second last but still had plenty to do as he chased He Rock's turning for home.

McInerney gave his mount a strong drive as he secured a narrow lead inside the final furlong and went on to record a hard fought half length win.

“It was great that he won as I was doubting that he would work out for us,” said Flood.

“His early form over hurdles and fences was poor enough and I don't think it was an extra special race but it was great to come out of the right side of it and win.

"We thought he was in good order and were hoping he'd run well but it was an ordinary contest and he was at the right end of it today with the low weight and soft ground in his favour.

"It's great to have a winner as I haven't had one in a long time and thanks to J.P. for supporting me, he has one other horse with me. It is hard to find good ones but we'll keep trying.

"We'll see how he comes out of the race, it was a tough enough race and we'll have a chat with Frank (Berry, racing manager) and see."

Smashed into odds-on favouritism Rhythm Divine delivered in style in the Toals Dial-A-Bet on 02890 321 721 Mares Maiden Hurdle at Downpatrick.

Revolutme left behind a disappointing show at Sligo on Friday when producing a game front-running performance to claim the Sheehy Motors Handicap at the Curragh this afternoon.

Deauville’s straight mile is expected to play to the strengths of Palace Pier when he bids to extend his unbeaten record in the Prix Jacques le Marois.