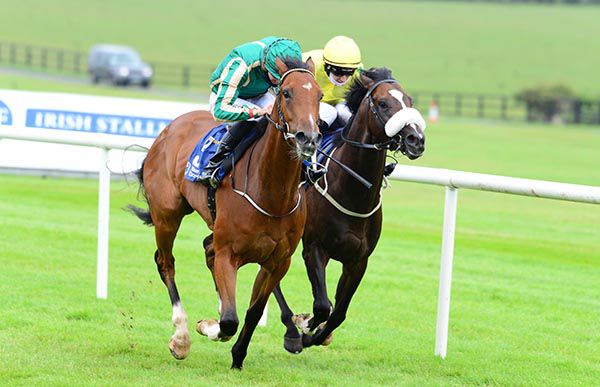 Edward Hopper rallied gamely to get back up on the line in the median auction maiden at Naas this afternoon.

Having made the running the Ger Lyons-trained gelding was passed by Aztec Parade with a furlong-and-a-half to go in the mile contest.

Colin Keane's mount stuck to his task well inside the final furlong and pressed the leader close home, getting his head down on the line to record a short-head victory.

The 4/6 winner had been fifth in Listed company, behind Ten Year Ticket, on his return to action at Leopardstown.

Shane Lyons, the trainer's brother and assistant said:- “He’d the best form in the race but he had to do it the hard way. It wasn’t ideal to make the running as he likes to chase a horse down.

“He showed great guts and resolution to fight back and a bit of intimidation with the other horse coming in on top of him.

“He’s a fine big horse and will be nice when he fills out into himself. We can step him up in trip no problem and the bit of juice in the ground is no harm to him either.”

The race was delayed by 11 minutes after Strip Light got under the stalls and ran loose.