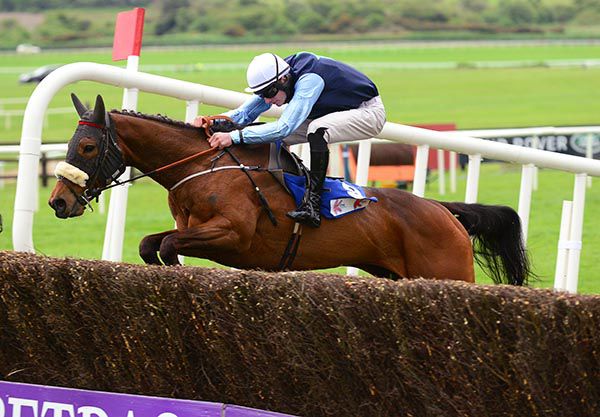 Hayes, older brother of leading Flat rider Chris, trained his last winner over ten years and, having handed in his licence, only took it out again in the past few weeks.

The Flemensfirth mare, available at 66/1 this morning and backed into 14/1 at the off, was prominent throughout in this 2m4f event for hunters owned by local farmers.

The eight-year-old jumped superbly and stayed on strongly in the straight under Redmond to beat the 11/8 favourite Alpha Male winner of this race last year and one of four in the race for trainer Peter Maher, by three lengths.

Hayes said, “I’d like to thank Jessica Harrington. I ride out for her in the morning and she allows me use her gallops which is great help. She’s a lovely woman to work for and she’s been a great help to me.

“Niall rides out in Jessie’s as well. He’s a very good rider and is underestimated as he doesn’t get many rides.”

Redmond said, ‘Paddy thought she had a great each-way chance and when I schooled her yesterday it was the first time that I sat on her. She jumped from fence to fence and stayed on great from the back of the second last.”