Life In The Park lands opener under O'Connor 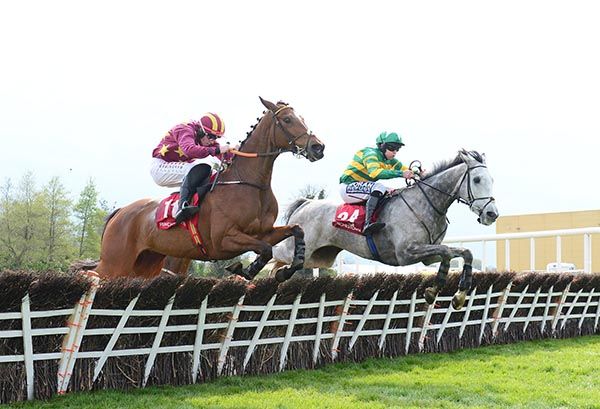 Life In The Park, near side, on his way to victory in the day's opener
© Photo Healy Racing

Life In The Park (9/2) was always close to the pace in the opening Adare Manor Opportunity Series Final Handicap Hurdle and made the best way home under Mike O'Connor.

The 9/2 shot tracked Midnight It Is throughout and headed the leader approaching the home straight. He was soon passed by British-raider Thanksforthehelp on the run to the last hurdle.

Grey Thanksforthehelp pecked slightly upon landing and Life In The Park got away from it the better as he regained the lead.

He found plenty for O'Connor to beat a staying-on Rock Road (16/1) by a length and three quarters. Thanksforthehelp (7/2f) gave best in third but was nicely clear of fourth-placed Aarons Day (12/1).

Trainer Henry de Bromhead said: “He was a bit disappointing at Christmas and we put him away. He seems to appreciate this ground.

“I’m delighted for the Maloneys and for Mikey (O'Connor) who is a big part of our team.”

Jack Foley won the Adare Manor Opportunity Series and de Bromhead was the leading trainer of the series.

De Bromhead also gave an update on Bob Olinger who was pulled up in the Grade 1 champion novice chase yesterday at the festival: “It was massively disappointing and I was very disappointed with myself that I ran him.

“I was so happy with him and I said if he showed me anything that would stop me from running him, then I wouldn’t have run him. He seemed in great form.

“Nothing obvious has shown up since. We have months to think about it now and hopefully we’ll get him back on track.”

Life In The Park won his maiden hurdle in Tramore this month by 17 lengths.

The Stewards interviewed J.R. Wildman, rider of 12th-placed Humble Glory concerning his use of the whip in the closing stages of this race. Evidence was heard from the rider concerned who accepted that he was in breach of the regulation and apologised. Having viewed a recording of the race and considered the evidence the Stewards were satisfied that J. R. Wildman was in breach of Regulation 10.3.f, excessive force and 10.3.b, out of contention. Having considered J. R. Wildmans' record in this regard the Stewards suspended J. R. Wildman for two racedays.