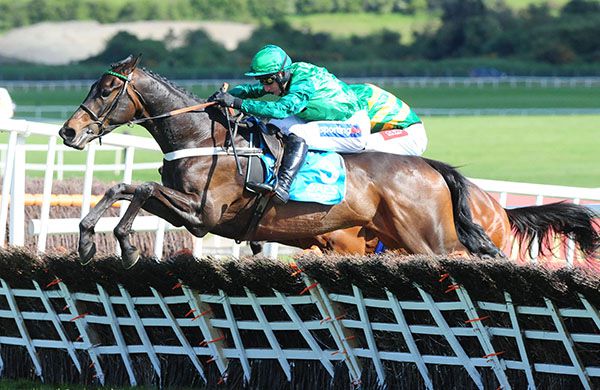 Fusil Raffles overcame a “horrible” injury to wrap up his season in style in the AES Champion Four Year Old Hurdle at Punchestown this afternoon.

Nicky Henderson's charge burst on to the scene in impressive fashion when taking the Adonis Hurdle at Kempton back in February but sustained a nasty cut in the process.

The French-bred was forced to miss Cheltenham and Aintree but made a recovery in time to claim a Grade One on his fourth career start today.

Daryl Jacob settled behind the leaders on the 13/8 favourite before producing his mount to tackle front-running Fakir D'oudairies before the last.

Fusil Raffles soon got on top going to the final flight and stayed on strongly on the run-in to post a two-and-three-quarter length margin over the long-time leader.

“He was great. He's done very well to get back from the injury he had at Kempton, it was horrible,” said Henderson.

“Obviously he had to miss Cheltenham and he had no chance of getting to Aintree so it was just whether we had time to get back for this.

“To be fair Sarah that looks after him has worked her socks off with the cut. It was on his hind leg and that's why he's got the boots on, to protect him.

“There is still a wound there but it's covered up. Credit to everybody, the vets who stitched him together at Kempton and our guys at home, and Sarah in particular, because it's been a great effort to get him back.

“Fair play to him, he must be a good horse because I was nervous that he wouldn't be quite ready for a battle like that both mentally and fitness wise. We only started training him three weeks ago so he's a tough horse and a good one.

“We're very lucky because we found him and then he got wounded. Then a week later I found a thing called Pentland Hills hiding in a corner!”

Jacob added:- “He’s a nice horse and will go on a bit softer ground as well. They have done a fantastic job here with the ground all week and you couldn’t fault it.

“I was confident enough but to be fair to the second horse he quickened again off the bend and just as I got to him he had a little bit of a blow.

“He’d a big jump at the last and that sealed it. Please god he’s got a big campaign next year and it was nice to see him go and do that today.”