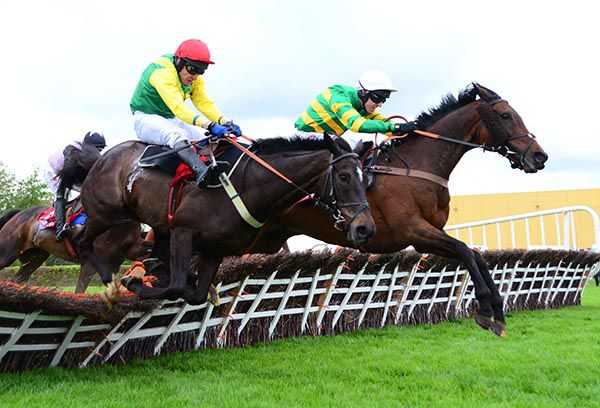 Unowhatimeanharry won a second renewal of the Ladbrokes Champion Stayers Hurdle at Punchestown today as the eleven year old returned to winning ways with a surprise 16/1 success in the featured race on day three of the festival meeting.

Unowhatimeanharry was a star staying hurdler when winning the 2017 renewal of the race which then presented him with form-figures of '11111-11131' and while the wheels didn't exactly come in the interim, today was just his third win in the intervening two years.

Ridden by Champion Hurdle winning jockey Mark Walsh, the J.P. McManus owned son of Sir Harry Lewis went to the front before the final flight today and in the end repelled Bacardys and Bapaume to win by three lengths and a head.

Afterwards winning trainer Harry Fry stated ““I’m over the moon. We brought a lorry load here and if we could pick any of them to win this week it would be him but to be honest he was possibly the least likely. He’s just thrived since he’s come over here, and the change of scenery appears to have sparked him up.”

Fry added “he took the first fall of his career at Ascot (last December) and then didn’t show any of his old spark in his last two runs. We were coming here in hope rather than expectation.

“Mark (Walsh) said at Aintree he didn’t enjoy himself down the inner so we let him out handy with a bit of light and he’s come alive.

“He’s put us on the map and won countless races for us, and at 11 years of age to come back and win a Grade 1 especially after the way he’s run recently is special.

“There was a chance if today hadn’t gone well it could have been his last run, so we’ll cherish this win.

“The race he won here two years ago was a real battle up the straight with Nichols Canyon and he showed those battling qualities again.

“We’ll enjoy this and enjoy the summer and he’ll tell us (if he comes back in training next season).”