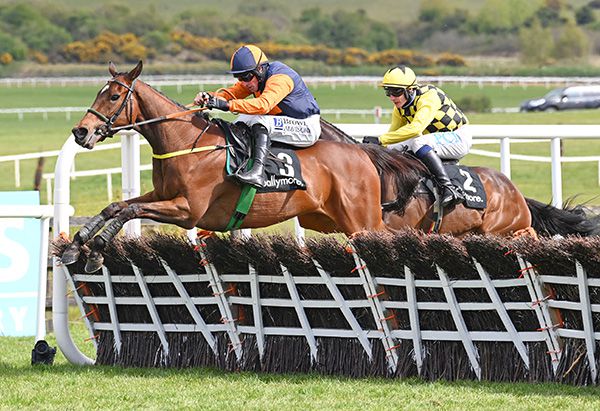 Jeff Kidder caused another upset today as March's 80/1 Fred Winter Hurdle winner defeated the Triumph Hurdle horses to land Punchestown's Grade 1 Ballymore Champion 4YO Hurdle at odds of 22/1, much to the relief of his trainer Noel Meade.

Henry De Bromhead's Triumph Hurdle winner Quilixios today weakened tamely from the second-last flight while Haut En Couleurs, third in the Triumph, himself folded to third place on the run-in.

Jeff Kidder, in contrast, came from off the pace and in the end held runner-up Zanahiyr, fourth in the Triumph, by three parts of a length.

The Stewards called an enquiry into an incident turning into the home straight as runner-up Zanahiyr was momentarily squeezed for room by Jeff Kidder, but left the result stand.

The win was jockey Sean Flanagan's 61st this season, his personal best, and seeing him take third-place in the Jockeys' Championship.

Eight-times Champion Trainer Meade has been eclipsed by all-conquering Willie Mullins in the years since 2008 and afterwards admitted “it's been a lonely old week up until now!

“I said Willie (Mullins) has been the easiest man to find in Punchestown, as he's been in the winners' enclosure all week and to be fair he was the first one to congratulate me.

He added “I said in Fairyhouse if he ever jumps them all he'll be a real good horse and he jumped brilliantly today.

“He's just never stopped improving and since he came back from Cheltenham he's like a film star in the yard. The girls take him off to the beach for a dip and I think he's liking every minute of it.

“I had two going to Cheltenham, him and Beacon Edge, and I said to Sean you could have two winners as you've two great chances.

“A real fast gallop really suits him, like they went in the Fred Winter and as they did there. They were coming back to him and his jumping was fantastic.

“He's going to have a little break although I suppose he's so well you'd think to yourself you should keep going.

“He'll certainly have a run on the Flat, he's never going to be a chaser.

“Now that he's won that he's going to have to stay with the big fellas now, that's his last chance to run in a four-year-old race, so he'll have to wait until the back end to have a go again.”

Jeff Kidder is named after an American lawman in the closing days of the American Old West.