Fahey has Punchestown in mind for impressive Gypsy 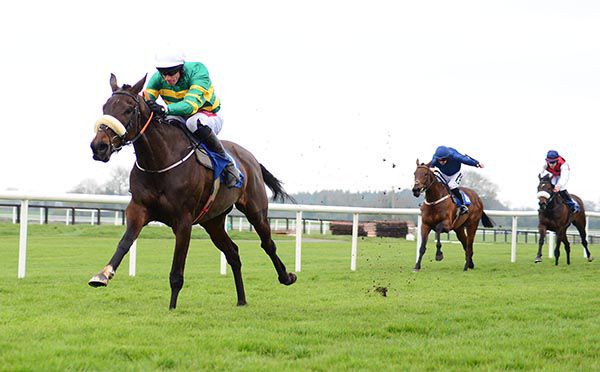 Successful on her debut at Ballinrobe last August, the daughter of Jeremy was then purchased by JP McManus.

She was second over hurdles on her first start in the famous green and gold silks, but got back to winning ways last time out at Naas.

Expected to follow-up today, the bay five-year-old was sent off the 2/1 favourite with Derek O'Connor aboard.

Settled towards rear, she took closer order before the straight and swept through to lead from the furlong pole, soon stretching clear, going on to score by eleven lengths.

The Willie Mullins duo of Yukon Lil (9/4) and Coolreevy (4/1) were no match for the winner, and they finished second and third respectively.

Fahey said afterwards: "She's a lovely filly and is improving with every run. She travelled into it well and they went a nice gallop so Derek was able to switch her off. She arrived there doing handstands.

"I'm delighted after selling her that it's all worked out. The pressure is off now after winning the last day and even more after today.

"She's a filly to look forward to next year, and she goes on the soft equally as well. She may go for the mares bumper at Punchestown."