Our Legend books his ticket for Cheltenham 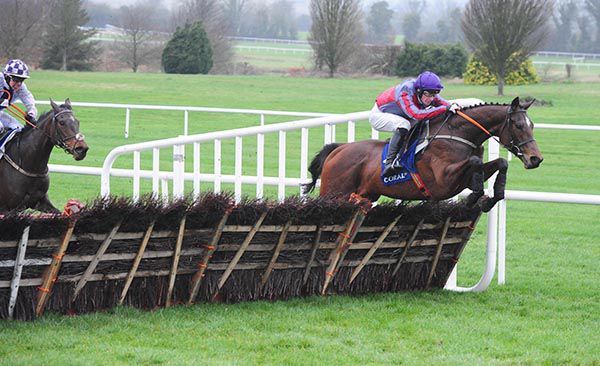 The son of Finsceal Fior was the most experienced over hurdles in this four-year-old event, and the 7/2 chance took over in front from the well-backed 15/8 favourite Fenta Des Obeaux early in the straight. Volatile Lady tried to throw down a challenge but a mistake at the last halted her progress, and Our Legend kept on well on the run-in to score by a length and three quarters.

The winner’s stable-companion Bercasa made a pleasing hurdle debut when keeping on nicely into third a further eight and a half lengths adrift.

Mullins said, “He had a wind-op after Fairyhouse in December. I bit the bullet that day because he didn't get home. David said he made a little noise then so I got a small wind-op done on him. It's given him confidence now.

“He took a blow in Fairyhouse last Saturday and I was hoping it would put him right but I hate going back quick after last week. I took a chance, and it paid off, and the wind-op obviously worked a treat.

“He gets a penalty now for the Fred Winter. That might get him into it and if it does he'll go for it. If he doesn't get into that he might even go for the Triumph itself.

“He has a mark of 123 in England and I think he'll get a 5lb penalty. The handicapper was saying during the week that the cut-off would probably be 130 but 127 was the highest up until this year.

“If he's alright he'll definitely go for one race or the other.”