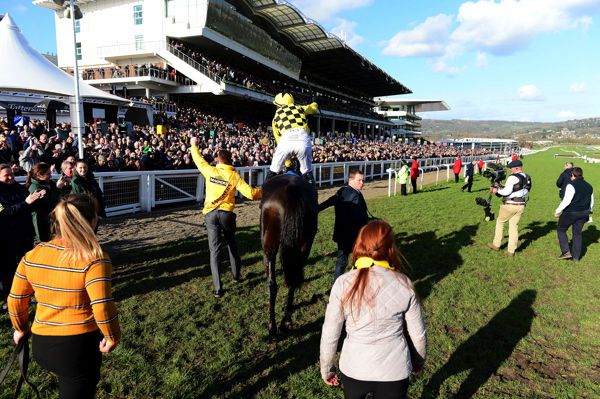 Al Boum Photo and Paul Townend are greeted by the crowd after winning the Gold Cup
© Photo Healy Racing
The bottom line is last week's Cheltenham festival should have been run behind closed doors. Cramming in quarter of a million spectators over four days turned the side of a Gloucestershire hill into a glorified Petri-dish. Avoiding such a grotesque scenario required a decision to be made the week before by either the BHA or Jockey Club Racecourses. Instead the most basic bureaucratic instinct of all prevailed - cover your own arse.

No matter how self-righteously indignant so much of the commentary is in the wake of the festival, in the circumstances of the run-up to it taking the decision to run behind closed doors would have been a brave call. As well as a logistical and commercial headache it would also have risked a torrent of criticism about scaremongering and such a unilateral decision going against government guidelines. It would have been an expensive call too. But it would have been the correct call.

There's inevitably a touch of hindsight to that. But not so much that it absolves those paid to provide leadership.

Warnings about the scale of the approaching Covid-19 pandemic have been coming for weeks. Pictures from Italy in particular were a stark warning of what we are assured is inevitable. Even more stark are worst case scenario models of the scale of infection and likely mortality rates. All this information was out there prior to the festival. The implications weren't fully appreciated or considered.

Rather than make a call based on a wider social perspective, the reflex to shelter behind government guidelines took over. They were doing all that was recommended by the British government and that meant going ahead. That covered Cheltenham's arse. Boris Johnson was doing all that was recommended by his chief medical officer despite it being at odds with most other European governments. That was his arse covered.

In Ireland, despite what many now argue, there was no widespread outrage at the prospect of up to 15,000 Irish racegoers going to Cheltenham beforehand. There was certainly no warnings from the Irish government despite subsequent opportunistic comments by the Minister for Foreign Affairs Simon Coveney suggesting that the meeting wouldn't have been allowed take place here.

Their guidelines were about travel to Italy and other countries. Anyone seeking reassurance about going to Cheltenham could point to official instructions saying it was OK. If anything there was a prevailing attitude of relief about Cheltenham sneaking in under the wire before such public blow-outs got banned. There were even absurd suggestions of it being some defiant display of the human spirit and other such guff.

Only once present in Cheltenham did the sheer ludicrousness of it all strike home. Those who might have been uneasy but went or were sent suddenly faced the surreal reality of what a chain-link of sustained arse-covering can produce. A day after the first death in Ireland from Covid-19, and predictions of many more fatalities to come, more than 60,000 people poured into Prestbury Park.

This was in a wider context of countries preparing to go into states of national emergency, urging populations to stay indoors as much as possible, work from home, come together as societies to protect the vulnerable, and maintain social distancing wherever possible. In short a context of fear and dread.

Yet racing's own little corner carried on, presenting a tone-deaf face to the world that simply looked more and more crass as the week progressed. In the face of growing public anxiety it was little wonder that trotting out the government guidelines line and props such as banks of hand-sanitizer jarred as an exercise in expediency. It also reflected a woeful lack of imagination.

While the festival was in full swing the Premier League took the initiative and opted to shut down completely until April. It's come to something when you get to be on the receiving end of an ethics lesson from the Premier League. Ultimately the 2020 Cheltenham festival is likely to be recalled in terms of a chronic failure of leadership. Unique circumstances required much more than systemic arse-covering.

British racing might absolve itself of responsibility by pointing to its obedience of guidelines by a government many others believe woefully incapable of the sort of leadership urgently required. But there was a timeframe when it could have taken the initiative itself in relation to such a singular event in size, scale and significance. It failed to do so.

That there are still no restrictions on the public going racing in the UK is mindboggling. No specialist qualification in epidemiology is required to recognise how permitting large social gatherings is contradictory to advice about reducing contact and maintaining social distancing. Financial and political considerations are no excuse for failure to make tough but necessary decisions.

The decision to run the Cheltenham festival with no crowd restrictions has already been expensive in terms of the sport's broader reputation. Let's hope that's all it is. That's because now the wait begins to see if the cost is much more than that, for those who were there and the broader community we've come back to. It should never have come to this.

It is worth bearing in mind though how the bureaucratic impulse is borderless. Irish racing too is responding to Covid-19 on the basis of advice from the department of health and the chief medical officer. What's different is the nature of the advice. The other factor is that there has been no meeting here even close to the scale of Cheltenham which is basically the biggest fixture of the year for both jurisdictions. But the requirement for hard calls is coming here too.

Irish racing is facing into at least two weeks of racing behind closed doors, a model that maintains the all-important media rights money for racecourses but which impacts on the livelihoods of on-course bookmakers, Tote staff, caterers and others. Given the numbers of livelihoods tied up in this, and the lessons available from other jurisdictions around the world, it appears to be a reasonable policy for now. The question could increasingly become how long can it last?

Infection rate predictions are such that no sector can expect to escape. What impact that will have on how racing progresses day to day is hard to predict. But the potential scale of this emergency is enough to dissuade presumption about the present situation being sustainable.

This is a fraught and unprecedented reality that society in general has to deal with. It makes examining the actual racing action itself seem superfluous at best.