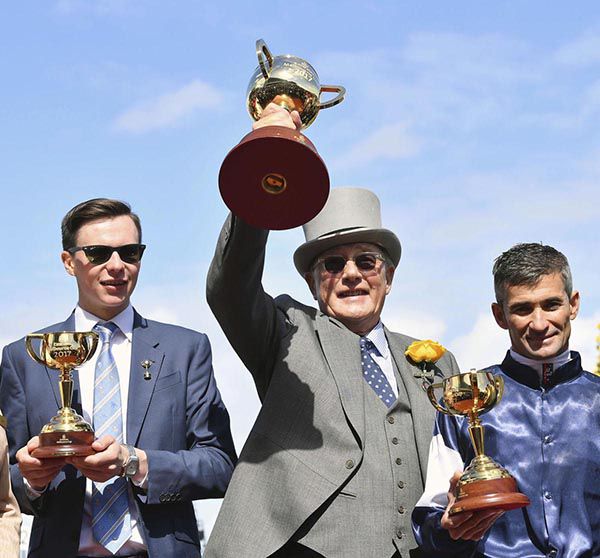 Joseph O Brien with owner Lloyd Williams and jockey Corey Brown after they won the 2017 Melbourne Cup with Rekindling
© Photo Healy Racing
The Melbourne Cup has always been regarded as a sporting reflection of Australia and is likely to be so again in the early hours of tomorrow morning. It's famously the 'race that stops a nation.' But reports down under suggest national disquiet over racing in general is expanding to an extent that warns everywhere else of the dangers of failing to look in the mirror and examining its public reflection.

Recent TV footage of racehorses ending their days in a slaughterhouse has provoked national coverage down under. It came on the back of animal cruelty charges against top trainer Darren Weir and high profile stories about electrical 'jiggers' being used to make horses run faster. Throw in stories about doping, race-fixing and steroid abuses and Australian racing - the financial foundations of which are so admired here - is suffering a reputational nightmare.

So it's most famous race is simultaneously both shop-window and lightening rod. When Aidan O'Brien's Cliff of Moher had to be put down in front of the Flemington stands last year he was the sixth horse in six years to pick up life-ending injuries in the Melbourne Cup. Painfully simplistic portraits of drunk gamblers enjoying themselves impervious to a hurt horse's fate were painted and will no doubt be dusted off again if another unfortunate animal is badly injured tomorrow.

However inaccurate such representations are doesn't mean they're not a reflection of changing social mores around the sport in Australia. The Melbourne Cup, once a straightforward joyful expression of a nation's love for a bet and a party, is becoming a much more problematic occasion, evolving from a happy self-conscious assertion of a fair-go Aussie battler national identity to something very different and cosmopolitan.

Aidan and Joseph O'Brien will have seven runners between them on Tuesday. Mer De Glace will try to maintain Japan's run of success at the Spring carnival. Godolphin's Cross Counter will try to defend the title he won so efficiently last year. These are horses owned by royalty, billionaires and corporations. The 'home' team seems mostly made up of imports expensively bought from Europe by other local billionaires.

The Cup is still a handicap but no one pretends any of its more fanciful egalitarian notions aren't mostly a relic of the past.

Instead, just as the weekend's Breeders Cup action took place against a welfare background, it is becoming an increasingly fraught exercise. Rigorous pre-race veterinary checks of the kind that ruled out Marmelo and Ispolini provoked grumbles along the lines of the authorities trying to justify considerable expense on veterinary equipment. That's a big stretch. But even if there was something to it erring on the side of caution has to be seen to happen in the current welfare climate.

If something dreadful happens then it's vital the sport is in a position to point out it carried out all necessary checks and then some. Even then the nature of the sport leaves any number of circumstances out of anyone's control. Mongolian Groom's sad fate in Santa Anita is a case in point. What's significant is how opinion in Australia is turning on an issue that is very much within control which is the whip.

The six time Cup winning owner Lloyd Williams has suggested it should be banned. The CEO of Racing Victoria has said the whip is unsustainable in the long term, declaring it a question of when and not if a transition is made. These are hardly clichéd bleeding heart types but influential figures able to see how racing doesn't exist in its own bubble. The lessons for closer to home are obvious in terms of wider public perception.

Considering he officially took out a licence in 2016 the stratospheric climb of Joseph O'Brien's training career is astounding and took another step with Iridessa's superb Breeders Cup victory on Saturday night.

O'Brien joins Freddy Head as the only person to both ride and train a Breeders Cup winner. He's also the youngest ever winning trainer at US racing's showpiece. O'Brien is also just the fourth successful Irish based trainer to win in the 36 year history of the Breeders Cup. In terms of achievement by the age of 26 his accomplishments surpass even his father's.

In many ways though age comparisons are redundant because it's difficult to compare like with like. Acknowledging O'Brien's superb ability and drive doesn't preclude recognising how rarely if ever has anyone begun a training career from a similarly beneficial position.

That he has exploited the opportunities so masterfully testifies to the substance of a rare talent that is increasingly becoming singular in terms of accomplishment. Then again, with it apparently only being a question of time about his 21 year old brother Donnacha venturing into the training ranks too, comparisons might yet be valid.

The Supreme Horse Racing Club saga rumbles on, with any number of different avenues being tortuously ventured down, all of it leaving the sport looking less than convincing in terms of governance. Considering so much is being invested by Horse Racing Ireland and others in the growth of syndicates, such a catalogue of apparent light touch regulation appears far from convincing.

It seems much of the Supreme story boiled into public notice on the back of a HRI directive in July that required clubs to morph into syndicates. Clubs previously had to provide a list of member details to HRI since those members were theoretically all involved in the same horses and to the same degree. Syndicates, by definition, are made up of different shares.

Since the Supreme controversy includes allegations of oversold shares then murky areas in terms of definition appear to exist. By some accounts warning bells were rung on this long before this year which seems understandable since being able to identify and contact those involved does seem like it should be a prerequisite in the ownership of any horse.

Dealing with syndicate representatives is one thing for trainers in terms of everyday logistical practicalities. Such a casual format in relation to the membership at large should hardly be the same for those in authority.

Plenty people have plenty opinions about Michael O'Leary but no one can accuse the Ryanair boss of not keeping everybody on their toes. There's probably a business management module on offer somewhere on the basis of O'Leary's ability to wrong-foot expectations. He did it spectacularly in May when announcing he's leaving racing within five years. Now he's done it again with jockey arrangements for the winter ahead.

Davy Russell is more familiar than most with O'Leary's modus operandi. But having ridden so much for O'Leary in recent seasons - including a pair of Grand Nationals on Tiger Roll - he might have been forgiven for thinking he was top of the pecking order for Gigginstown rides out of Gordon Elliott's yard.

Instead he was taken off last season's top novice Delta Work for Saturday's Grade One at Down Royal in favour or Keith Donoghue. The latter also took over from the injured Jack Kennedy for Samcro's impressive chasing debut. Eddie O'Leary stressed that Gigginstown will employ a panel of riders this season.

The obvious question that lifted right out of that revolves around Tiger Roll and his appointment with a potentially historic third Aintree National in April. O'Leary wouldn't be drawn on it although it's hard not to think that, all things being equal, Russell and Tiger Roll is too good a partnership to interfere with.

After all Russell can also remind himself that with O'Leary, jockeys can go out of favour but also come back in. Donoghue is proof of that.