Honeysuckle becoming a real legend of the sport 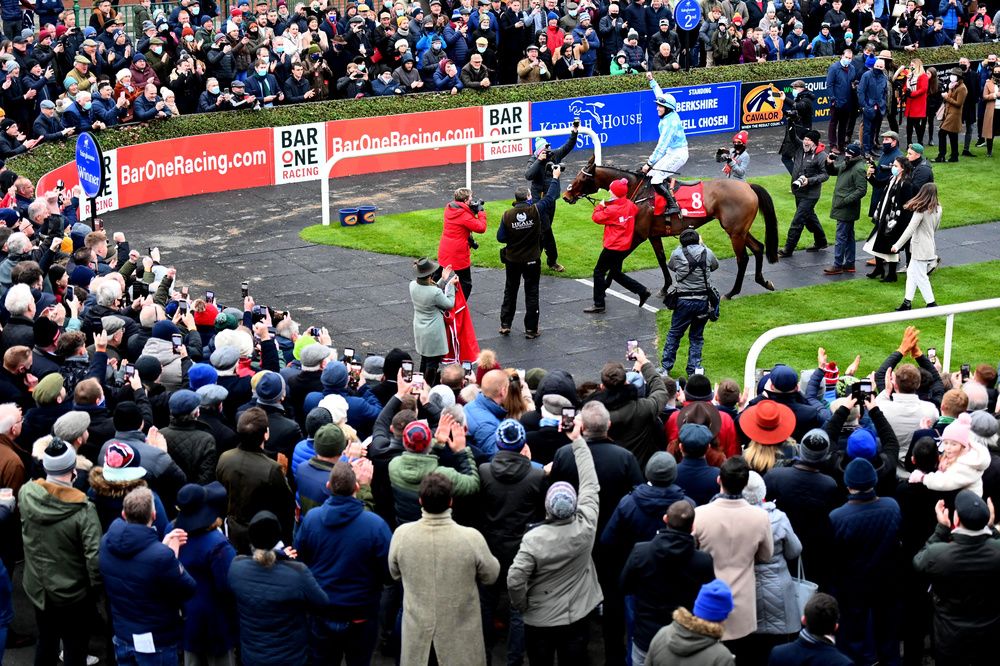 All three Grade 1 contests were brilliant spectacles. My Mate Mozzie getting mugged on the line by Statuaire in the Royal Bond, Beacon Edge looking more likely to pull up than win with half a mile to run in the Drinmore before storming up the straight to score going away. And then there was the remarkable Honeysuckle putting on a show in the Hatton’s Grace.

This time last year I was wondering which unbeaten sequence - Envoi Allen or Honeysuckle - would survive the longest. One year on and she is starting to look unbeatable. There were legitimate concerns that Sunday’s race might have brought to an end her unbeaten run. Lack of a recent outing, unsuitable ground, change of trip and decent opposition added up to a potential banana skin for Honeysuckle but she once again showed that she is now simply in a different league.

13 races unbeaten and with no obvious pretenders to her Champion Hurdle crown on the horizon she has the potential to rewrite history. Add into the mix that she is ridden by the iconic Rachael Blackmore and you have a recipe for legend. In my lifetime there have been many truly great racehorses both here and abroad but less than a handful throughout the history of the sport have achieved the status of legend and I’d argue that in Ireland we only ever had one before - Arkle. Just maybe Honeysuckle could be our second.

Of course the one major caveat is that National Hunt racing is attritional and as we sadly saw twice at Fairyhouse on Sunday injuries, and sometimes fatal injuries, go hand in hand with the sport.

With that in mind, Imagine paying £170,000 for an Irish point-to-point winner. What’s the very best you could hope for over the following three years with the horse?

How would it sound if that horse won nine of its ten starts including two Cheltenham Festival victories - Supreme Novices Hurdle and Arkle Chase - amassed over £255,000 in prize money and was currently the clear ante post favourite for this season’s Champion Chase.

I’d imagine you’d be pretty chuffed with yourself and I’d also like to think you’d be more than pleased with how your trainer had campaigned the horse.

Yet, a significant portion of racing fans are none too pleased with Nicky Henderson’s decision to bypass this weekend’s Tingle Creek because he is not 100% happy with Shishkin. I doubt owners Joe and Marie Donnelly share those sentiments. Henderson is employed by the Donnellys to produce their star horse in peak condition each time he appears on a racecourse and so far he has achieved that to perfection.

Henderson is a master of his craft and in his defence he always puts the welfare of his horses above all else, but his commercial association with a leading bookmaker forces him to make public statements that are sometimes at loggerheads with those core principles. Henderson then takes umbrage with the public reaction when he has come across as less than truthful. Perhaps he’d be better off severing ties with the betting industry and concentrating on what he does best.

Racing’s conspiracy theorists received a minor setback last week when the IHRB released negative results for hair and blood samples taken from four thoroughbreds present at the Monasterevin raid earlier in the month. Realistically the three horses - one from Ted Walsh and two from Liam Burke - that turned up while the raid was underway were always likely to be negative but the the fact that the Jessica Harrington horse that was already stabled at the premises before the authorities arrived is also negative for any prohibited substances is particularly good news for the sport.

We still have no indication when the identity of the seized substances will be revealed by the Department of Agriculture and this continues to give oxygen to the conspiracy theorists who, like the anti-vaxxers, are a tough crowd to win over with mere logic.

Finally, prize money was again in the news last week when the French announced that 2022 levels of prize money would be increased to €278 million, up €30 million on their 2021 figure. These are huge numbers compared to either here or the UK and again show how the Tote system is far better for the sport than bookmakers.

France, Australia and Hong Kong continue to show the benefits of having a strong industry-owned betting platform that pumps profits back into the sport. It’s such a pity that Horse Racing Ireland and the UK authorities couldn’t have protected and built up the Tote over the last two decades.

It’s no coincidence that many leading racehorse owners such as Joe Donnelly, JP McManus, Michael Tabor and Derek Smith made their fortunes from bookmaking. When you look at the amounts of money that is made off the back of gambling on sports such as horse racing you have to wonder what position Irish and UK racing would be in if those profits had been funnelled back into the sport. Take Bet365 CEO Denise Coates’ income as an example - in 2020 she took a salary of £422 million and dividends of £48 million. Just one individual in one betting firm earning the equivalent to almost twice the 2022 prize money levels of French racing.