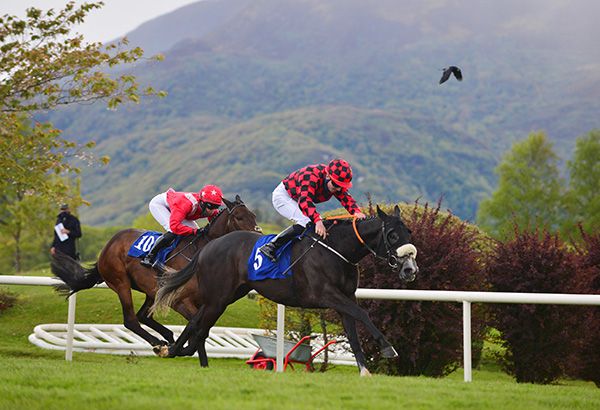 It was a great thrill to ride the second winner of my career on Angel’s Trumpet for Peter Fahey in the first division of the Killarney Outlook Handicap over an extended mile at Killarney on Tuesday, with the prize money going to Cancer Trials Ireland thanks to the generosity of the owner, Anthony Rogers of Airlie Stud.

Peter had put up a year’s training fee last year but the horse he had didn’t work out and the Rogers family offered up Angel’s Trumpet so it was great to win with Cancer Trials Ireland as the official owner for the first time.

It was the best start we could have asked for. He seems to be a nice horse going forward. He’s honest and always runs a good race and hopefully they have a lot of fun with him this year.

Getting gelded has done a great job for him. I was talking to a few people who were in Willie McCreery’s and they said he was very coltish when he was there. Since he’s been gelded and come here he’s been likely a completely different horse. He has a great temperament.

He was working well at home since he was gelded. He hasn’t been with us too long. We got him just over Christmas. We thought he’d run a nice race. It was just that the draw was very wide so we were hoping more than anything but to be fair, he’s a very honest horse and he ran a great race.

The plan from my perspective was to get him to go forward out of the stalls and try get him slotted in as close to the rail as possible. That was the only real tactic. You need to be sharp to do that. You have to have the horse and I was lucky, he travels well in his races so it wasn’t too difficult with him.

If anything, he was nearly travelling too well the whole way. We weren’t really going a great gallop and he was constantly trying to go on a few strides. I was lucky that Henry de Bromhead’s horse, Reddiac took the race on around four furlongs out, and put a bit of pace into it, because I’d say if nothing happened there he would have hit the front three furlongs out and that would have been too soon. Everything just worked out well for him in the end. 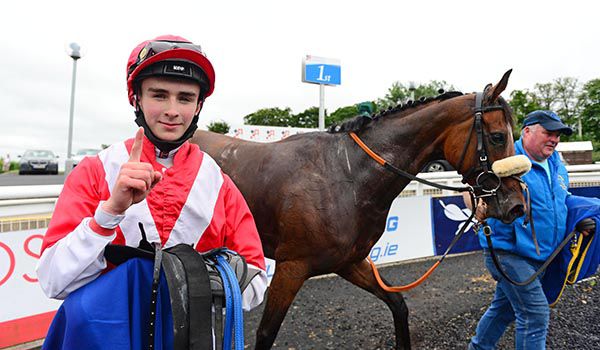 It meant an awful lot to me. I had to wait a bit since my first winner last year and for it to be for Cancer Trials Ireland, that just added to it.

My only goal was to try to ride as much as I could for the first few years as I got a bit stronger but I’ve been lucky enough to have two winners. I’m only 17 but I started pony racing late enough, I only did a season or so of that. So every ride I’m getting a bit tidier and stronger.

Kevin is my brother and we know Peter and Ber Fahey for years. They taught me how to ride. With the horses he has in the yard, Peter has given me nothing but chances and I couldn’t be more grateful for how the last year has gone for me.

Kevin has had an unbelievable year with Peter, winning at Cheltenham and then a Grade 1 in Aintree thanks to Belfast Banter, and it’s nice to have my brother around the yard. He’ll tell me the truth too. He’s not afraid to give me a bollocking if it’s needed but he’s only looking out for me.

Kevin O’Ryan is looking out for me a bit at the moment in terms of picking up some extra rides. It’s hard for a 10-pound claimer. If I get one more winner and drop to a seven-pound claim, I’ll probably sign on with him as an agent and hopefully pick up a few more outside rides. But I’m not focussing on that. I’m not even focussing on the winners. It’s just riding as much as I can so I can improve.