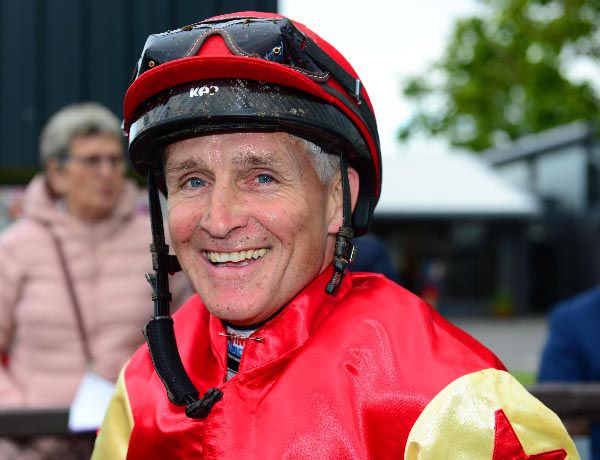 Racing is a funny old game. It is great to have been on the run I have been on lately and to be getting a bit of attention for it, though having turned 50 this year, it’s hardly going to go to my head! But it isn’t too long ago that I was wondering if it might be time to hang up the boots.

I had a winner early in the year and then nothing for ages. I had plenty of rides, plenty of placed horses and I was riding well but it just wasn’t happening. I went about 85 rides with no winner and I was starting to doubt myself.

Then I went to Sligo, where I thought I had a great ride in the last. Getaway Katie Mai looked nailed on to win. She came out because of the ground and I just thought that this was the story of my year. Then I happened to ride the other two to win — Powersville for Tom Mullins and Noirvento for Tracey Collins. That was the start of a good run of eight winners in 10 days, topped off with a double in the Curragh last Friday, having also had a winner there on Thursday.

You couldn’t do it on a bigger stage than the Curragh during Irish Derby weekend, especially to win two big handicaps, on Crafty Madam for Ken Condon and Agent Zigzag for John Oxx. I should have won on Ice Cold Alex as well for Ken but was just a little bit unlucky, and was third for Jessie Harrington on a Niarchos horse For Your Eyes in a three-year-old maiden. Then on Saturday, I just got beat for third in the Railway Stakes for a small trainer Ger O’Leary. That was a good buzz. I got plenty of horses to run well.

All of the lads that I work for are happy to use me still and the horses are hitting a bit of form. I got a great kick from riding a winner for John Oxx though. I have been riding for John for years and years and he has been very good to me through thick and thin.

He is a gentleman of racing. He is a massive trainer. He has scaled the heights. Now the quality of horse is down. He still trains them as well he ever did but we just don’t have the firepower. Everyone was delighted for him. Hopefully we can go along and get a few more winners for him now.

There is no doubt that I was considering my future before Sligo. There is always the risk element as well. You are wondering is it worth it, going around when the horses you are riding are not running well. Everyone needs a bit of silverware. When things aren’t going well I wither but when things are going well I blossom. It was great then to hit a bit of form. You just feel better in yourself.

When you are riding winners, you ride better. Everything seems to happen better for you. You make the right decisions, you don’t overthink, you get on with the job and do it.

I keep myself very busy. I am in Mick Halford’s, John Oxx’s, Johnny Murtagh’s, Ken Condon’s, Jessica Harrington’s, Ger O’Leary’s. They would be my main people during the week. Then I could ride work any given day for anyone.

Trainers appreciate my feedback. I am a good judge of a horse, a good judge of work. If an owner gets fussy and says ‘Colin Keane is available’, I will say ‘No bother, let Colin Keane ride it.’ I don’t throw my toys out of the pram. He mightn’t be available the next day and I will ride the next day. And they appreciate that and we just get on and get the job done. I like to see the people who I ride work for do well, because that means I am doing my job well and everybody is making money at the end of the day.

When you are younger you are a bit more hungry and you might get the hump about someone else getting the ride, thinking you should be riding it. But as you get older you just get on with it. When the young bucks come along sometimes they get the old bucks out of the herd. I just keep going, keep the head down, work hard. And I have been enjoying it.

You get a great kick out of something like Romanised winning the Irish 2000 Guineas for Ken. I was in the work, the week before, I always lead the work. I rode his companion Success Days and we knew he was ready for a big run. We knew going to Ascot this year that the horse is back in form. He ran a cracker when he finished fourth.

I pride myself on my judgement a bit. I know what is going on. All my trainers seem to appreciate my feedback. That is why they bring me in. It is good for the owners if we say, ‘This horse could run first three today’ and he does run first three.

Also I am lucky. I don’t have any issues with weight. Some lads have to torture themselves. I never missed a meal in my life. I am fit so it is enjoyable.

Anyway, I am no good at anything else. So, I have always enjoyed it and always got a great kick out it. I have been all over the world riding horses everywhere so I will keep going.

I have had a load of great days but if I had to single one moment, it would have to be Royal Diamond winning the Irish St Leger for Tommy Carmody and Johnny Murtagh in 2012. Also, the year before, winning the Doncaster Cup on Sadler’s Rock for John Oxx was brilliant.

It was an extra special buzz to ride alongside my son Scott. Like any parent you are proud to see your children do well. On one occasion we both rode in the Cesarewitch, I finished sixth on one of Charles Byrnes’s, Wonder Laish and he finished fifth on Neverushacon for Jessie. That was great run for both of us to finish fifth and sixth in such a big handicap.

The opportunities were scarce over here though so he went off to England and is there a year now. We went over to see him ride at Windsor on Monday. He has done very well, has 20 winners and ridden for a lot of trainers.

He is an apprentice with Mick Channon, who is a great boss. If the young lads get stuck in and work hard they get the opportunities. He has been good to Scott. He seems to like him and Scott likes Mick. They get on well together and hopefully they can continue being successful.

Having a son riding is great but more than half the weigh room wasn’t born when I rode my first winner, Rose Of Carlow, for my father Michael at Listowel in 1987. I side beside Donnacha O’Brien and sure he wasn’t around for another 10 years or more! But then on the other side is Kevin Manning and he’s the eldest in there at 52. He’s as fit as a flea, as hungry as ever and is riding better than ever. You can’t beat experience.

So I can’t retire before he does. It’s not in my mind now. While I am enjoying it and healthy, I will crack on for the time being anyway. If I am to keep having weekends like last weekend there will be no stopping me.