Racing Has To Stand Over What It Is 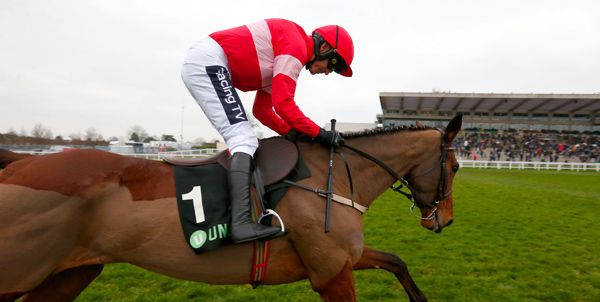 Laurina could be a superstar
© Photo Healy Racing

In the midst of such an anxious political climate there's more than some reassurance about the lure of this week's Cheltenham festival. But in tune with the times Cheltenham 2019 is already shaping like being perhaps the most fraught festival ever.

In keeping with an atmosphere of insidious Brexit uncertainty it's a festival that will see National Hunt racing in Britain facing up to some identity struggles of its own.

The reverberations of last year's festival when half a dozen horses sustained fatal injuries - including three in the concluding Grand Annual Chase alone - prompted a 67 page British Horseracing Authority's report designed to address welfare concerns it admits may threaten the sport's future.

Rather like Brexit there is often bemusement expressed here about British racing's response to such issues. It is reflective perhaps of how a greater percentage of people here still have more everyday practical relationships with horses.

But social change means these long-term issues are becoming more relevant here too. And in the short-term, with Irish racing's biggest race meeting of the year taking place in Gloucestershire, it very much has skin in a game which has the BHA under serious pressure.

As a result more vets will be on duty this week and a series of welfare measures will be in place such as cooling units. The weather might make them mostly irrelevant but a lot of this involves being seen to be proactive. Fences have been moved and runner limits put in place on certain races.

Every runner in every race faces a veterinary exam that will take into account legs, joints and heart checks. They will also have to be trotted up to check for any physical concerns.

If any are found vets can decide they are unsuitable to race. That's an uneasy prospect that has trainers here concerned even about the surface horses will be required to trot on. It doesn't take a big leap to imagine the possibility of a controversy similar to Polydream's Breeders Cup exclusion.

Jockeys will get daily briefings reminding them of their responsibilities in terms of equine welfare. That's bound to mean a re-heat of Cheltenham's annual angst over use of the whip, where the best of intentions often wind up relegated behind the urgency of winning on the biggest stage of all.

On top of all that Cheltenham 2019 also sees increased checks on the back of last month's equine influenza outbreak with Willie Mullins forecasting the likelihood of non-runners due to passport irregularities.

On top of everything, it all takes place in the midst of the cross-channel sport's own unpleasant political atmosphere regarding boycotts over prizemoney levels with accompanying accusations of bullying. Even the wind might prove a spoilsport again.

It's a febrile brew that has the potential to boil up with the eyes of the general sporting world looking on. Like the Grand National, the consequence of overwhelming exposure is greater examination. That's the trade, and British racing is finding it an increasingly anxious trade.

Because by its very nature there is no avoiding equine fatalities in jump racing. Every welfare move made, meaningful or mostly cosmetic, cannot prevent horses being badly injured. And the sad reality is that there will be serious injuries this week.

That isn't dismissive of the welfare steps taken or the ambitions in them. Anything that can keep the casualty rate as low as possible not only needs to be done but has to be seen to be done. However the reality of the sport is that fatalities will always occur.

As a result jump racing as a whole needs to be able to stand over the risk-challenge dilemma it presents. Those of us in thrall to the game obviously can do that. These are animals bred for this purpose, generally treated with a level of care and attention a lot of humanity would long for.

But the anxiety bound up in having the wider world watching this week implicitly acknowledges how the equine injuries sustained in providing our entertainment can seem some way from an edifying spectacle sometimes.

Racing can't run away from that. Nor can it wish away the examination that comes with exposure. But at the end of this week Cheltenham has to be able to stand over what it is which is a supreme test of man and beast.

On Saturday, a number of well-known racing fans gave their opinion on what might happen over the four days. Their wisdom is outlined here: Cheltenham Festival Tips and Fancies

But asking anyone else to do something demands one be prepared to do the same. So here, for what they're worth, are a few predictions for the week.

The Champion Hurdle is surely about the two mares Apple's Jade and Laurina. Five horses have won the great race on three occasions. Buveur D'Air is trying to join that exclusive company. But would any of the quintet - even the mighty Istabraq - have been comfortable giving either of these mares 7lbs?

Apple's Jade is a wonderful talent. Yet six weeks ago she wasn't even being considered for the Champion Hurdle. Laurina can't match her achievements but shapes like a potential superstar. Bet like she is one.

Plenty will tell you Presenting Percy might also be. Too much might be being made of his unorthodox preparation although a little unease must linger about not having raced over fences in a year. Much will depend on the ground. Riding arrangements for Mullins's team will be a factor too. Al Boum Photo could be the value of the race and finally deliver Mullins a 'Blue Riband.'

As for a bet of the meeting, this corner is all in on Laurina. So a lay of the week has to be Buveur D'Air. And as for top jockey there will be a lot worse bet made this week than the 6-1 about Jack Kennedy to emerge on top.

In terms of what most to look forward, can it be that the whole flag-waving bit on the way back to the winners enclosure gets dialled down big-time?

Wider evidence is sadly abundant as to how no problem can't be made even worse by waving a flag at it. Waving tricolours will be harmless fun when the same can be said about the Union Jack getting a whirl at Punchestown next month. We're all in this Cheltenham thing together.

Everything else is overshadowed by Cheltenham and a cynic might suspect a certain coincidence about Horse Racing Ireland choosing Friday to confirm it has delayed the new Curragh's first fixture by three weeks until May.

It's the latest reverse in what has become an increasingly beleaguered project although in the overall context a few more weeks here or there isn't that big a deal. Much bigger will be the total cost of Irish racing's biggest ever capital project when the final figure is eventually revealed.

Of much more long-term significance was Friday's other announcement that HRI want a second all-weather track in place in Ireland by 2021 and are looking to potential investors for such a project.

Since it has long been mooted that a second all-weather circuit is required for the south of the country, the suspicion privately voiced by one prominent racing figure that the HRI owned Tipperary is being 'teed up' for the gig is widely felt.

However officials at Naas have already indicated they are considering whether or not to enter proposals too. There may even be a green-field runner too, and not a million miles away from Naas either .

Crucial to the long-term financial outlook of any second all-weather, wherever it is, will be media rights. Pictures underpin the whole thing. Since the future for old-fashioned betting shops looks more uncertain by the day many racecourses presume the magic world of 'online' will maintain demand for their product.

They may be right. But it's a brave move to bet millions on such a presumption.