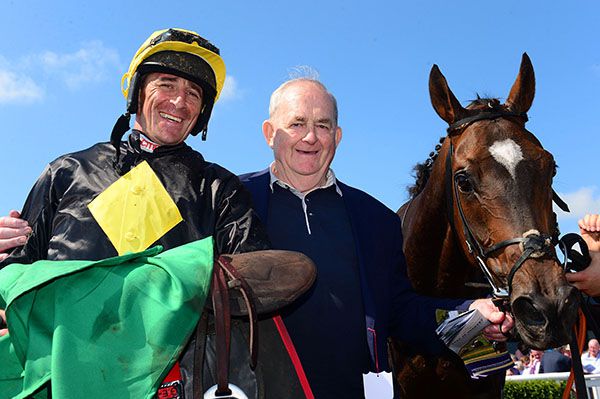 Carriacou ran out an easy winner of the Grand Steeple-Chase de Paris at Auteuil in the hands of Davy Russell.

Third in the race two years ago, he was then off the track for almost two years before returning to action in January.

Nursed into it in true Russell style, the Isabelle Pacault-trained seven-year-old was the only horse still on the bridle approaching the final fence — and after that he sprinted clear in the style of a fresh horse.

The home favourite Bipolaire fared best of the rest, but in truth it was all about one horse.

Willie Mullins fielded a strong team — including Irish Grand National winner Burrows Saint — but after travelling well for Paul Townend, who must have been fancying his chances of claiming a second feature race of the weekend after the success of Benie Des Dieux on Saturday, the six-year-old faded into fifth.

Rathvinden, ridden by Nico de Boinville in the absence of the injured Rachael Blackmore, was hampered early on and was always on the back foot afterwards.

Pacault becomes the first female trainer to win the French Gold Cup — while Russell joins an elite list to have won the Cheltenham Gold Cup, Grand National and the Grand Steeple-Chase de Paris.

After adding Sunday’s big-race success to his second Grand National win on Tiger Roll just last month, Russell told Sky Sports Racing: “I only got a phone call on Friday to see if I could do the weight and I could, thankfully.

“I had a spare ride yesterday so I’ve had a great two days.

“I came here to ride Solwhit in the Champion Hurdle here a few years back, and that was my only other experience (of the track).

“It went well, because I had all the main contenders in my sight. His jumping was the key to him — every time I thought I was maybe getting out of position, he jumped back into position.

“He settled well. I didn’t meet any traffic problems- just when we jumped the big ditch I thought I’d need to come on the bridle, and he did. Then I just had to wait, because I didn’t want to hit the front too soon.

“Isabelle had the horse in fantastic form — and I’m just really pleased I got the phone call.

“I was pleased just to have a ride in the race, never mind win it, so it’s fantastic. This is right up there with everything I’ve achieved — we look at French racing in awe over in Ireland.”