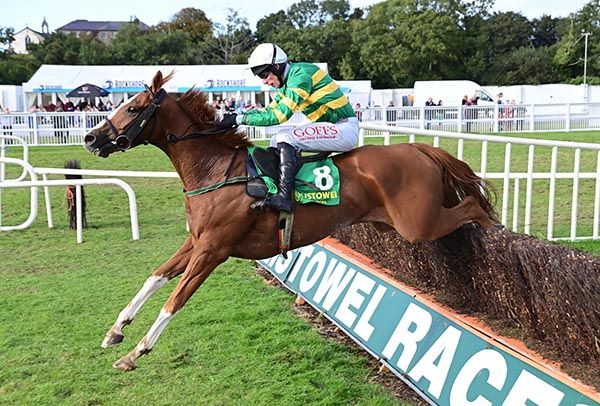 A flashy chestnut with four white stockings, the eye was drawn to Mica Malpic (5/1 — 4s) at all stages and having began in rear-division, was mid-field by halfway and smuggled into contention on the inside in the final half mile.

Mica Malpic was comfortably clear of Brideswell Lad and Outside The Door when both fell at the second last and had the measure of Goodnightngodbless when he exited at the final fence.

It was McManus' second winner of the festival week and Bolger said “he had won a hurdle in France and then disappointed but he has his mojo back. I don't think he even had a race the way Derek rode him.”

He added “he has been unfortunate and had one race in the bag when falling in Wexford (in June). He ran a lovely race when staying on at Killarney and the three miles today was a help.

“I was happy the rain stayed away and I think he had the race in the bag when the other horses fell. He's a nice horse for the future as he is only five and that's job done and I'm over the moon.”