'Savage form' stands Dancing On My Own in good stead 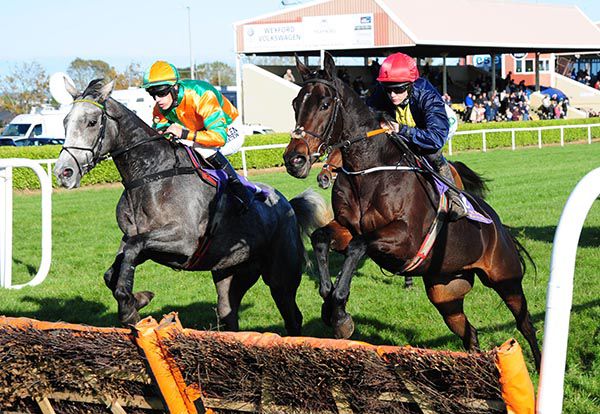 Dancing On My Own, right
© Photo Healy Racing

Dancing On My Own dominated from the front in the Casey Cattle Slats Maiden Hurdle over an extended two miles in Wexford.

Henry de Bromhead's charge has a fourth in a Grade 1 in his locker and looked a cut above his rivals in this company and so it proved.

He had the pursuers toiling off the home bend and increased the gap two out. From there he won as he pleased and eased 28 lengths clear at the line with Rachael Blackmore in the plate.

Those who backed the 8/13 favourite didn't have a single moment's worry. Notice To Close came in a remote second at 20/1 with Champagne Paddy third at 7/1.

Henry de Bromhead said: “We're delighted with that. It's nice to see him come back to the form he showed last year.

“We checked everything after Galway. Rachael said he even goes a little bit left so we think Galway just didn't suit him.

“I'm delighted he's back on track and he's a lovely horse. It's brilliant to get our first winner for the Mulryans.

“There is a two-and-a-half-mile in Navan, I'd say we'll stay left-handed anyway, near the end of November.

“Obviously we'd love to get him to the Ballymore next year. I don't think trip should be a problem.

“After Christmas last year we purposely we ran him in bigger races with the view that if he didn't win one he'd still be a novice this year.

“He has some savage form behind the likes of Klassical Dream (in a Grade 1 novice hurdle at Leopardstown in February).

“We'll see about trip now, Galway just messed us up a little bit. I think he stayed it (extended two miles five) but he just struggled going around Galway.”