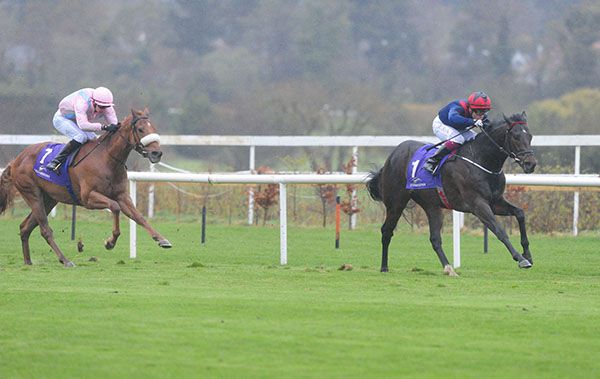 I Am Superman
© Photo Healy Racing

Well regarded I Am Superman made a winning handicap debut in the Leopardstown Summer Pass Handicap at Leopardstown today as the Michael O'Callaghan trained colt scored a comfortable win under jockey Leigh Roche.

O'Callaghan and Roche teamed up to win the opening two-year-old maiden of the year at Naas on March 24 with Red Epaulette and following I Am Superman's win, the trainer reported “we thought a lot of this horse last year and he was second first time out at the Curragh.

“He raced a little over enthusiastic second time out at Naas, we put a line through that, and on his third run he'd just gone a little bit weak on us. We just put him away, he wintered well and strengthened up well.

“I thought that was good performance, carrying top weight and from that draw. He wasn't the quickest away but Leigh kept him out wide on the fresh ground down the back and at the apex of the bend was able to slot in in front and set his own fractions.

“He won well and he said he was just idling in front. I'm delighted with him and delighted that he's come good because we did think he was a nice horse last year. Hopefully he can progress well.

“He got a fancy entry on Saturday but I think we'll probably treat him like a nice horse now and we won't rush him back. We'll pick out a race for him a few weeks time.

“We'll see what the handicapper does and go from there.”