2 in a row for McManus at Naas 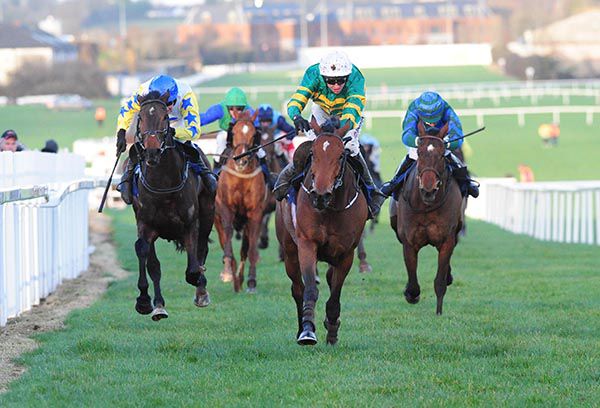 Following on from At Your Ease half-an-hour earlier there was another J P McManus-owned victor of race six at Naas, Punches Cross (5s out to 7s) taking the Paddy Power "Live Stream All Irish Racing On Our App" Handicap Chase.

Arthur Moore and Barry Geraghty combined in the training and riding roles with At Your Ease, but it was Joseph O'Brien and Mark Walsh that teamed up with top-weight Punches Cross.

On his first foray in a handicap chase, the victorious Stowaway gelding was one of three battling it out from before the last.

Shedding his maiden tag at the tenth time of asking, Punches Cross was too strong for Well Tom and Jimmyjames on the run-in, crossing the line with three and a quarter lengths and a length in hand.

“In fairness to him he jumped well today. They went quick and the race was run to suit him.

“He's been disappointing in fairness but things just worked out for him today.

“They were coming back to him and he was sneaking away. The stiff finish probably suited him.

“He's not a fella I'd be trusting with my life but it's nice that he's after winning a race now.”