5-in-a-row for Peregrine Run back over hurdles 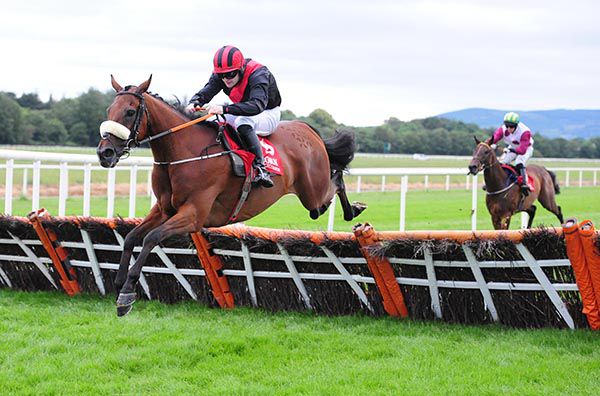 Peregrine Run (evens favourite) completed a 5-timer back over hurdles without his usual blinkers in the Gina & The Champions Play After Racing Hurdle at Cork.

The 15-time winner travelled beautifully in the hands of now regular rider Kevin Sexton and beat the novice Doctor Duffy (8s into 9/2) by three parts of a length having led before two out. Turnpike Trip won the 6.15 for Charles Byrnes but after that he had 3 2nd placings in a row — Give Battle Sky Marshal and Doctor Duffy.

Peregrine Run's trainer Peter Fahey said: "This race was never the plan - the plan was to go to Leopardstown (for a flat maiden) but they changed the rules for the Amateur Handicap at Galway and now a horse has to have run three times on the flat to qualify, so I said I'd stick him into this race and see.

"It worked out a great opportunity and he was in great form. He has been plenty busy but he is taking his races so well. He is loving it and will now go straight to Galway.

"He'll be entered in the Plate and the 3m hurdle on the Saturday. We'll see what happens and hopefully he comes out of this race well. I'd love to win a flat maiden with him this year as his easiest options over jumps are now all gone."

The Stewards fined Patrick Griffin, trainer, €350 for lodging a passport in respect of Lachlan Bridge (GER), in which the vaccinations did not conform with the provisions of Rule 91.

The animal had entered racecourse property and was subsequently withdrawn by the trainer's representative before the card had closed one and a half hours before racing.