A 2nd Galmoy as Percy hardens as Gold Cup favourite 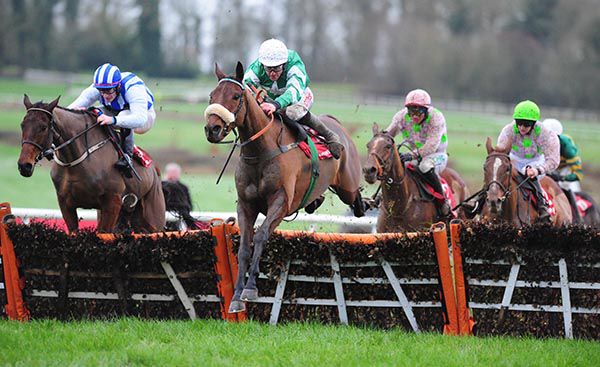 He may have been easy to back for the Grade Two John Mulhern Galmoy Hurdle but Presenting Percy (9/4 fav) won the Gowran event for the second year running and hardened as favourite for the Cheltenham Gold Cup.

Pat Kelly's charge is now 11/4 market-leader from 4/1 with Paddy Power for the Blue Riband in March, and it's easy to see why given the performance he put in here off a 316 day break under Davy Russell.

After travelling smoothly the dual Cheltenham festival hero picked up when required from two out, and Philip Reynolds' pride and joy then kept at bay a trio of Willie Mullins contenders on the run-in. Bapaume (8s into 11/2), Killultagh Vic (10/1) and Limini (7s into 6s) chased home at distances of a length and a quarter, a head, and three parts of a length.

"It's days like this that we ride for. It takes a horse as special as this lad for the crowd to get behind him," said Russell.

"Given the man that trains him, if he didn't want to run him again before the Gold Cup it wouldn't bother me. He's an exceptional man to handle a horse.

"He's an extraordinary man - all credit has to go to Pat really."

Meanwhile Reynolds said: "I can't believe it. I know we won this race last year and I'm sure most people thought he was going to go and do it again. I don't understand it (horse being clapped out of the parade ring).

“The people have taken to this horse and with that comes a lot excitement and a lot of pressure.

“I felt the pressure, with it comes a lot of responsibility. We've been trying to look after this horse to give him every chance to get him to the big day, where we all know we want to be, in March.

“Pat and I are very very close and go back a long way. He doesn't say an awful lot, he leaves that to me and I'm not sure I do a great job for him in terms of saying a few words.

“We've been very very patient. I sent back the horse to him in early August and we really were expecting that we'd have had as many runs coming here today (as last year).

“The plan was to come here today or three weeks time. You've seen the ground and what it's done to other horse so we've sat and we've sat.

“I know people were wondering whether we'd actually retired him! If I could have got Pat last night on the phone I think I might have retired him as my heart was all over the place!

“We've been patient and patience has paid off. He was in tremendous form, he was fit enough and had done enough work.

“He has said that he's one of the most special horses he's ever seen let alone trained. Every day that passes I'm beginning to believe him a little bit more.

“I bought him from Tom Costello. I bought Mall Dini from him the year before. He did the job for us in Cheltenham.

“I've been a long long time racing and had a lot of bad horses. When you get a bit of luck you stick where the luck is so we stuck with Pat and I said to him we'll go back down to Costellos.

“Tom Costello, Pat has been lucky for me and the jockey Davy Russell has been tremendously lucky for me. So I'm sticking now with those lads.

“Coming in here today I thought 4/1 about Percy for the Gold Cup was very skinny having not seen him all year.

“I thought they deserved to be a lot shorter in the market than Percy was before today but maybe he's just put down his marker.”

D.E. Mullins, rider of Shaneshill trained by W.P. Mullins, reported to the Clerk of Scales that his mount felt lame and was pulled up thereafter.

The Irish Horseracing Regulatory Board Veterinary Officer examined Shaneshill, trained by W.P. Mullins, at the request of the Stewards and reported the animal to be lame post race.