Accelerate signs off as Wand goes for O'Brien at Gulfstream 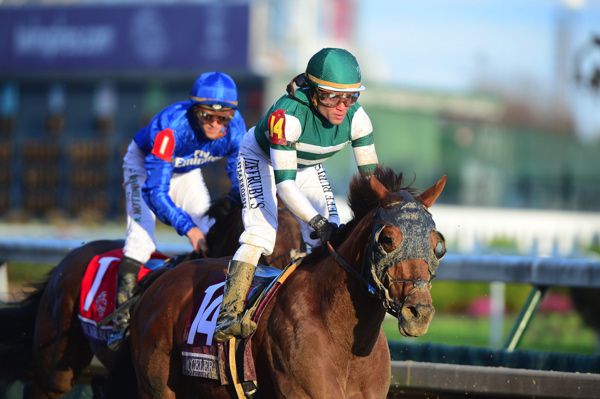 Connections of Accelerate believe he has the perfect draw to work from as he attempts to sign of his career on a winning note in the Pegasus World Cup Invitational Stakes at Gulfstream Park on Saturday.

The John Sadler-trained six year old, who was last seen landing the Breeders’ Cup Classic at Churchill Downs in November, will break from stall five as he bids to land a fifth successive Grade One event before retiring to stud.

Part-owner Stephanie Hronis said: “He has worked hard and is really just a grinder out there, especially in the TVG Pacific Classic in August and in the Breeders’ Cup Classic. It has been a thrill of a year to watch him race.

“Our trainer John Sadler is so good at being in tune with the horse. We know when John decides to go for his next race it is because they are ready and he is not pushing them.

“Both the Breeders’ Cup and Pacific Classic were exciting and were the highlights. The Pacific Classic was the first time Joel Rosario rode him and he rode our very first racehorse nine years ago, so that was a sweet moment.

“To go on to the Breeders’ Cup Classic was the ultimate dream for Hronis Racing.

“We were pointing at the Pegasus after the Breeders’ Cup, but we knew him getting there was going to depend on how he was doing.

“His last piece of work was good and to see him have the five draw we couldn’t have wished it any better — to be on the outside of City Of Light.

“We are going into the race really optimistic and immensely proud of Accelerate and knowing that his work is top form. He arrived midweek and he has looked good. We are excited.

“We are wanting to enjoy this as it is his final race, but at the same time there is immense pressure there.”

Frankie Dettori will try to spoil the party aboard the unbeaten Fausto Gutierrez-trained Kukulkan who took his record to three from three with victory in a Listed contest over course and distance last time out.

Dettori said: “I’ve watched a video of him and he has won at Gulfstream so I know he handles the track.

“You can’t compare the Mexican form with the American form and it would not be right of me to say so. He is a longshot, but he is unbeaten.

“The guys that own him have paid a lot of money to run him and have asked me to ride him. It is a challenge to me and I’m looking forward to it.

“I don’t know what to expect, but we are going to give it a go. Everyone is very positive and the trainer is upbeat. If I’m going to tell you I’m going to win on a longshot you would think I’m crazy, but I will be trying for sure.”

Dettori added: “I heard he is training well. It looks quite open and he could have a place chance. The owners have been big supporters of American racing and if I can get a piece of the pie that would be great.”

There will be Irish interest in the race in the shape of last year’s Ribblesdale Stakes winner Magic Wand, from the yard of Aidan O’Brien.