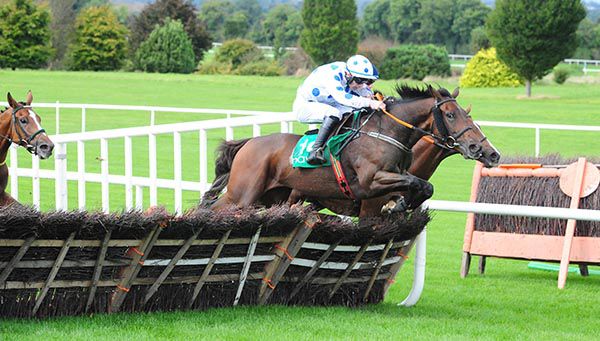 Advanced Virgo stayed on strongly after the last to take the Bar One Racing Download The App Maiden Hurdle in Navan.

Kevin Brouder delivered him to challenge Jon Ess at that flight and the latter was less than fluent at it.

Jon Ess took the runner-up spot at 5/1 by half a length from well-punted Pienta who went off 5/4 favourite. The 'jolly' didn't have a clear passage on the rail at the business end and had to be switched out but could make no impression on the winner.

Charles Byrnes said: “He's a lovely horse. It probably wasn't the best maiden hurdle. He had a nice run in Wexford and was probably a bit unlucky that day.

“He had a nice enough comeback run and the form of the race in Killarney had been working out.

“As regards a maiden hurdle for Navan, it probably wasn't the hottest but he's a nice horse.

“He'll probably go handicapping now and he'll definitely get further as he got two miles on the Flat.”

The Stewards interviewed R.A. Doyle, rider of Jon Ess, concerning his use of the whip in the closing stages of this race. Evidence was heard from the rider concerned. Having viewed a recording of the race and considered the evidence the Stewards found R. A. Doyle in breach of Regulation 10.3 (g), excessive frequency. Having considered R. A. Doyles record in this regard the stewards suspended R. A. Doyle for two race days.