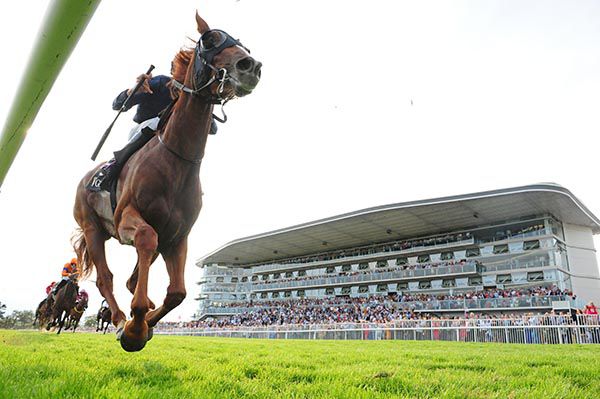 With first-time blinkers on and upped in trip Invitation came good for Ballydoyle in the Guinness Irish EBF Fillies Maiden at Galway.

Out quick after a Gowran fourth placing six days earlier, Donnacha O’Brien made all on his father Aidan’s daughter of Galileo.

She was soon fighting a losing battle though, weakening out of it in the final furlong to finish sixth.

Up front Invitation kept up the gallop to account for Joseph O’Brien’s runner, Irradiate by four and a half lengths. Lighthouse Lady (10s into 7s) was third, and another Joseph O’Brien hope, Mount Jannu fourth.

"I had a good draw, she jumped and travelled and she was very fit so she kept galloping," said Donnacha O'Brien.

"The plan is to get black-type and whether or not she'll be up to it we'll find out when we try it but that's the aim with her."

The Stewards interviewed W.J. Lee, rider of Lighthouse Lady, concerning his use of the whip in the latter stages of this race. Evidence was heard from the rider concerned. Having viewed a recording of the race and considered the evidence the Stewards found the rider in breach of Reg.10.3.(g)(frequency) and having taken his record into account suspended him for 2 race days.

The Irish Horseracing Regulatory Board Veterinary Officer examined Hazel Bay, trained by D. K. Weld, at the request of the Stewards and reported the animal to be post race normal.

The Stewards received a report from Mr. L. Walsh, Irish Horseracing Regulatory Board Clerk of the Scales, regarding the fact that G.P. Halpin, rider of Irradiate, weighed in at 1.2 lbs overweight. Evidence was heard from the rider concerned. Having considered the evidence, the Stewards were satisfied that the rider was in breach of Rule 231 (iii) and having taken his record into account suspended him for 2 race days.