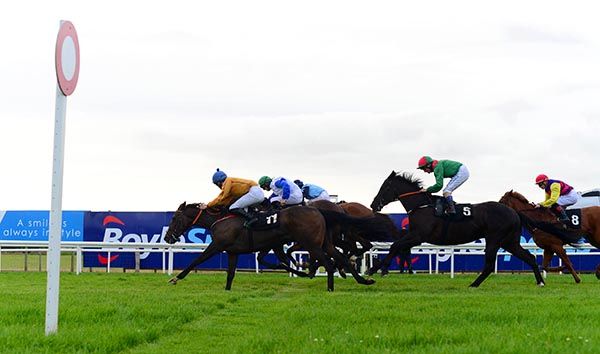 Alice Milligan completed a 311/1 double for owner/trainer James McAuley, as she just prevailed in the last at Down Royal, the Proparamedics Handicap.

Claimed by McAuley for E8,000 after finishing second at Sligo last August, the daughter of Dylan Thomas had been disappointing in two starts this season.

Available at 25/1 in early shows, the six-year-old came in for some market support and eventually went off an 11/1 chance under Luke McAteer.

Settled towards rear on the outer, she made good progress from halfway and was pushed along to challenge with two furlongs to race.

Ridden over a furlong out, she was soon in a share of the lead and just prevailed at the line by a short head. Hell Left Loose (14/1) was the one just denied on what was his debut for owner/trainer Vincent Carroll.

The John McConnell trained Bellick (18/1 from 25s) was just a neck away in third, while Ever Rock (10/3f) was a disappointing eleventh.

McAuley also saddled three others in this fourteen-runner contest; Beleaguerment (9th), Helen De Pourtales (10th) and Eglish (13th), while he was earlier on the mark with Sister Rosetta

"My instructions were actually to make the running, I think that's normally her only way of running," McAteer revealed.

"When you are riding for the boys, they are fit, happy and healthy so no matter where you land you have a chance.

"I just kept teasing her really down the hill and in fairness, she stuck her neck out. She was probably looking for the line but today was the day, thank God.

"All the McAuleys have been good to me all along, so it is always good to ride them a winner."

The Stewards interviewed L.T. McAteer, rider of Alice Milligan, concerning his use of the whip in the latter stages of this race. Evidence was heard from the rider concerned. In his evidence, L.T. McAteer stated that he had misjudged his use of the whip and mistakenly exceeded the guideline by one hit. Having viewed a recording of the race and considered the evidence, the Stewards were of the opinion that L.T. McAteer was in breach of R10(3)(g) by using his whip with excessive frequency. Having taken his clean recent record into consideration, the Stewards cautioned L.T. McAteer on this occasion.

The Stewards requested a report from James McAuley, trainer, as to the apparent improvement in form of Alice Milligan, placed first, as compared with its recent form. James Gough, Authorised representative of James McAuley reported that their charge was placed second in her last two runs in 2021 and sustained an injury after this. Following a break to recover, the filly reappeared at Leopardstown on the 6th April and led until headed in the straight and tired. He added that she ran two days later at Dundalk which was possibly too soon. She was given a two month break to freshen up and reappeared today. Having considered the evidence the Stewards noted the content of the report.