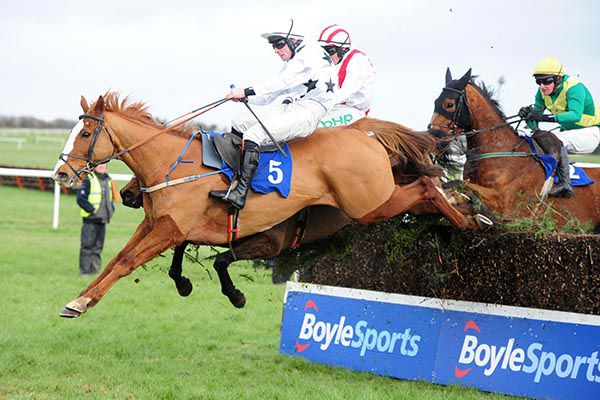 In the form of his life at the age of ten All The Chimneys (3/1 out to 9/2) went in again in the Join Us Here Again February 21st Handicap Chase at Thurles.

The David Mullins-ridden All The Chimneys and D'bru Na Boinne (4/1 into 100/30 favourite) brushed off each other at the final fence and the latter unseated Paul Townend.

Sweet-travelling All The Chimneys possibly had the upper hand in any case at that stage, though Townend was understandably frustrated not to have gotten the chance to put it up to the eventual five length victor on the run-in. Seskin Flyer was the one that eventually chased home the Willie Austin-trained victor in second place.

"He is improving with all his racing and that was his easiest win. He is in such good form he'll go again in a fortnight or three weeks time," said Austin.

"Today's ground was better than ever he ran on - we thought he was always a soft ground horse but he handled it very well today. We'll keep him at it while he is in form."