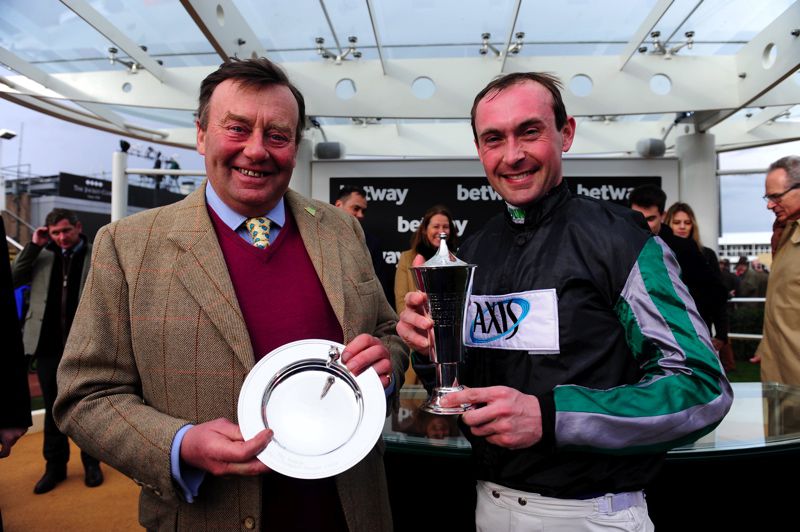 Altior was made to battle in the Betway Queen Mother Champion Chase but eventually prevailed in the day two showpiece at the Cheltenham Festival to extend his unbeaten record over obstacles to 18.

In doing so he moved level with the great staying hurdler Big Buck’s — but the result looked far from certain for much of the home straight.

Nico de Boinville was content to follow Saint Calvados in the early throes, but the 4-11 favourite left his hind legs in the water jump and for the next few fences he jumped a bit too big.

Left in front at the third-last, De Boinville still looked confident, although the challengers were mounting up behind him, with Ruby Walsh angling second-favourite Min for a run.

However, it was Sceau Royal who nipped up his inside and hit the front approaching the last, as Min dropped away tamely.

On jumping the final fence Altior began to stay on, only for Politologue to appear on his outside to challenge, but Nicky Henderson’s stable star, as is his wont, pulled a length and three-quarters clear.

It was a fourth Festival success for Altior after wins in the Supreme Novices’ Hurdle, Arkle and this race last year.

De Boinville said: “What an absolute monster and aren’t we lucky to be in an age where he’s here. We should just celebrate him. He’s a phenomenal athlete — he doesn’t know how to lose.”

Henderson said: “I was forgetting it was his 18th straight win. I was thinking about Winx and I thought that’s totally irrelevant, 18. The whole team is what it’s all about. They have been brilliant.

“He’s a better horse on better ground, we’ve always said that, and he did get headed.

“But he very quickly found all that was needed. He’s hugely talented, but very brave as well.”

He went on: “He had to have a little fight there today, but he made it exciting for everybody, including myself.

“I couldn’t really see the water jump. The other horse landed running at the last and headed him. He was a bit lonely out there and Nico said ‘come on, we’ve got to go’.

“You’ve seen him before at two out or somewhere have a bit of lull and as soon as he said pick it up (bridle) and go, the gears worked.

“It was a cracking good race, but for me it was hell. He can do anything. Nico was worried Saint Calvados wouldn’t make it, so who would. He went a good gallop and followed him.

“He went on when he had to and he made one mistake, otherwise the jumping was great.

“It seems an eternity ago this morning when Sprinter (Sacre) was parading before racing and that took us back to those days.

“To have had two horses consecutively come into your life, we are just very lucky people.”

Looking to future plans, Henderson said: “I will think we will wait for Sandown (Celebration Chase on April 27), but we’ll sit down for the summer and discuss (stepping up in trip).

“We will give it consideration and I wouldn’t worry about him. I think public opinion is going to force us into thinking about it. I’ve no doubt it will be seriously on the agenda.”

Paul Nicholls said of Politologue: “We rode him a bit differently today. I said to Harry (Cobden) ‘take your time and have one go at Altior from the back of the last’.

“I thought going to the last we were going to give him a real race and we did make him go. It was probably a career-best run from Politologue.

“We’ll either go back to Aintree for the Melling Chase again or the two-miler on the last day of the season at Sandown (Celebration Chase), depending on how well he is.”

“He’s run a mighty race — probably a career-best. The second is no mug either and it was a very, very good horse race.

“The ground is what it is. He might have been slightly better if the rain hadn’t come, but we’d probably have had the same result.

“He’ll go to Aintree. The plan was always to go there for the two-and-a-half (Melling Chase). We might have to meet the beast (Altior) again.

“Our horse has done everything we could have hoped for today and probably a bit more. I’m very proud of him.”