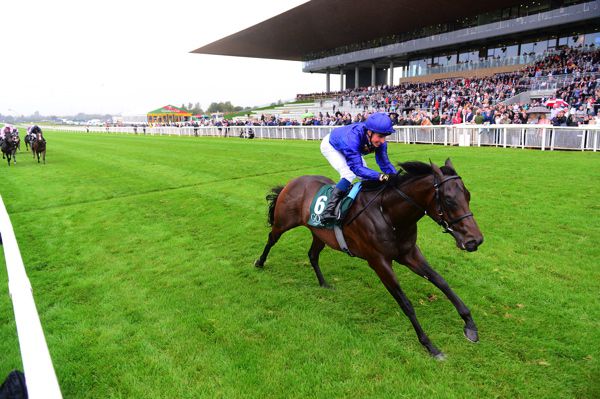 Charlie Appleby is still coming back down to earth following Pinatubo’s spectacular display in the National Stakes at the Curragh.

The Shamardal colt has made giant strides since his winning debut at Wolverhampton back in early May, with dominant victories in the Woodcote at Epsom, the Chesham at Royal Ascot and the Vintage at Goodwood earning him a step up to the highest level in Ireland.

While he was a red-hot favourite to maintain his unbeaten record last weekend, few could have envisaged such a breathtaking performance — including his trainer, who insists his star colt has never lit up the Newmarket gallops.

Appleby said: “There has obviously been a lot of talk about it since Sunday, but thankfully the horse doesn’t read the papers!

“It’s up to other people to analyse his performance and compare him to other horses. From my point of view, I just feel very privileged to be able to train a horse like him.

“As I’ve said all year, he’s not a horse who would catch your eye at home. He just eats, sleeps and drinks and goes about his business.

“I think there have been a few raised eyebrows after I’ve said that, and then he goes and does what he does on a racecourse, but he never shows me anything like that in the mornings.

“We always thought he was a nice horse, but I’ve never hyped him up because there really was nothing to hype up. He just goes up the gallop and joins his lead horse and doesn’t do much after that. You could set your watch by him.”

In his last two races, Pinatubo has looked in a minor spot of trouble at the halfway stage, only to end up leaving his rivals trailing in his wake — coming home a staggering nine lengths clear in Ireland on Sunday.

“James (Doyle) said when he rode him in the Vintage he was a bit worried at one stage, but then he just changes gear and off he goes,” Appleby added.

“Sunday was the first time William (Buick) has ridden him on the racecourse, and I told him not to be worried if he wasn’t travelling at halfway.

“William said afterwards he was niggling him along between the three and the two, but then when he put him in the gap he picked up and found another gear — he doesn’t do that at home.”

Pinatubo is unsurprisingly all the rage to crown his juvenile campaign in the Darley Dewhurst Stakes at Newmarket on October 12.

Appleby confirmed the Rowley Mile Group One is his likely target, but stopped short of making his participation a definite plan.

He said: “He came back from Ireland on Sunday night and he’s fit and well, thankfully.

“I spoke to His Highness (owner Sheikh Mohammed) straight after the race, and we both agreed we’d leave it a week or 10 days before we firmed up any decisions and give him chance to get back into his usual routine.

“We’ll make a final decision in the middle of next week. He’s had five runs, and he’s a Group One winner, so there is no pressure to run him again this year.

“But at the same time, the Dewhurst is a lovely race to win — and at the moment there is no reason not to run him.

“We’ve all enjoyed the ride so far, and long may it continue.”