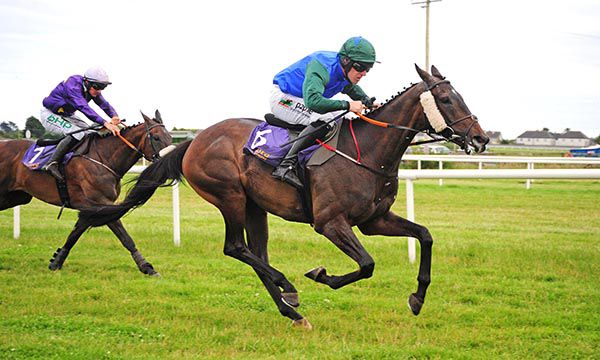 Plan Of Attack survived a slight scare at the last to open his account over fences in the Neville Hotels Beginners Chase at Wexford.

Henry de Bromhead's charge had been runner-up to Go Another One on his chase debut at Clonmel last month and went one better this time.

Barry O'Neill sent his mount into the lead three from home in the three-mile-one contest and the 9/4 shot travelled best turning for home.

He looked to have matters in hand going to the last but there was a slight disagreement as O'Neill asked for a big leap and Plan Of Attack went low.

De Bromhead said:- “He probably wasn’t as good as he was in Clonmel, and Barry thought he didn’t travel and jump as well.

“He’s been in quite a while and only had a short break around Christmas so we might back off him now.

“He’s a staying chaser and really only got going in the last half-mile. I’d say he doesn’t want very heavy ground but he could tip away up to Christmas if the ground is alright.”