Baby Power wins on big day for the Caldwells 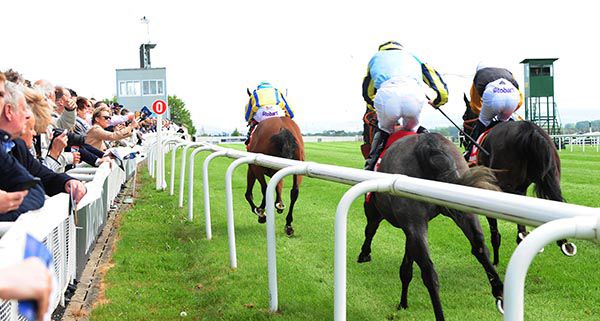 There was a dramatic conclusion to the Hanlon Concrete Handicap at the Curragh with Baby Power landing the spoils for the father and son team of Bernard and Garry Caldwell.

“Maybe we’ll win the elections tonight — it could be a good day yet,” quipped local councillor Caldwell senior after Leigh Roche got 14/1 shot Baby Power home by a length and a half from Polly Douglas in the big field sprint.

It could have been different if eventual fourth home Little Clarinet hadn’t been impeded by a loose horse on the far side of the track close home though. Teddy Boy had stumbled and unseated Gavin Ryan leaving the stalls and he veered right towards Little Clarinet — looking a possible winner at the time — close home.

“She ran a cracker the last day, and the key is to keep her sweet and happy. I’m delighted with her," said Garry Caldwell.

“Leigh said she wasn’t doing a tap in front but she needs something to challenge her, and I said to Leigh to leave it as late as you can.”

At the request of the Stewards, G.M. Ryan, rider of Teddy Boy, trained by Edward Lynam, reported to the Stewards' Secretaries that his mount stumbled and unseated him when the stalls opened.

D. O'Brien, rider of Little Clarinet trained by Joseph Patrick O'Brien, reported to the Clerk of Scales that his mount was impeded by a loose horse.