Bachasson to stay over hurdles 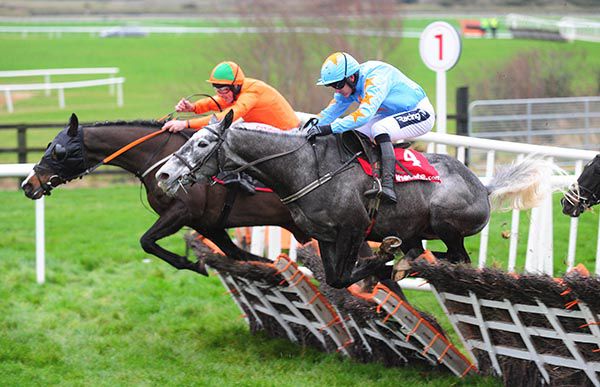 Bachasson is likely to remain hurdling for the rest of this season after his winning comeback at Punchestown on New Year’s Eve.

Willie Mullins’ eight-year-old has spent the last two campaigns over fences, winning three of his six outings and even taking his chance in the Gold Cup at Cheltenham.

He was an early casualty there and picked up a nasty injury, which kept him off the track for nine months, but he displayed a fine turn of foot on his return to win over two and a half miles — with bookmaker quotes abounding for the Stayers’ Hurdle as well as the Ryanair and Gold Cup afterwards.

“I’d say he’ll go hurdling now — he just seemed to really enjoy it and made ground at every hurdle,” said part-owner Colm O’Connell.

“He hadn’t seen a hurdle or a fence since the Gold Cup. We took him there to see what would happen, not thinking he’d be fit enough to win.

“He had a problem with his leg after the Gold Cup. A piece of bone had come out — and I’d written him off, to be honest.”

The only other horse the O’Connells currently own is crack two-mile chaser Un De Sceaux.

“It was at Ascot when we were over for Un De Sceaux that Ruby (Walsh) told us he was back riding out and they were seeing how he was getting on,” said O’Connell.

“On his day he was a very good hurdler — he was second to Long Dog in the Royal Bond and would have been fifth in an Albert Barltett, but he parted with Patrick (Mullins) at the last

“He’s eight now, he’s very lightly raced, and we just need everything to go right — I think good ground is important. Whether two and a half miles might be better, I don’t know, but there’s no no ‘adult Neptune’!

“I didn’t see that performance coming, to be honest. Ruby said it was like a five-furlong sprint at the end, and he took off. Ruby told us he was going to mind him, and I was thinking maybe he might be a Galway Hurdle horse — but he goes and does that.”

Where Bachasson goes next has yet to be decided. But he will be stepped up in class, with the Galmoy Hurdle a possibility.

“We left thinking he might be a contender for the big ones,” added O’Connell.

“He’ll have to go again over hurdles now. There’s a Grade Two at Gowran (Galmoy) — I couldn’t see him going for the Cleeve at Cheltenham — but Willie is the master, and that race he won was an unbelievable find, so we’ll leave it to him.

“When Un De Sceaux runs you expect him to run his race, he’s box office. With a horse who you aren’t sure about, when they go and do it you get a real kick out of it — I felt like we’d won the Gold Cup.

“There are questions about three miles, and it would have just been nice for him to stand up in the Gold Cup to find out about his stamina. Straight after the race I asked Ruby whether to stay over hurdles or go back chasing, and he told us to just enjoy the night!"