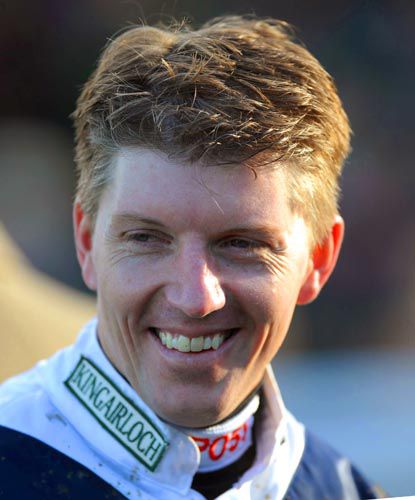 Bags Groove set up a trip to Aintree in April after getting his season back on course with victory in the 888Sport Pendil Novices’ Chase at Kempton Park.

After finishing fifth at the track in the Kauto Star Novices’ Chase on Boxing Day, the Harry Fry-trained eight-year-old made amends when gaining a fourth victory over fences — and second at Grade Two level — when conceding weight all round in the two-and-a-half-mile prize.

Taking matters up over the second-last, the 7-4 shot pulled out more than enough up the run-in to defeat Castafiore by a length and a half.

Fry said: “The trainer cocked it up Boxing Day as I ran him 16 or 17 days prior to the Kauto Star at Huntingdon, seeing if we would get the three miles, rather than going straight for the Kauto Star.

“It was too quick a turnaround and Huntingdon left his mark and he wasn’t himself. We deliberately pinpointed this race, as it gave us a nice break.

“He is not at his very best yet and Noel (Fehily) said he lacked his usual zest early doors, but he came home nicely.

“We felt he was ready to do himself justice and this was a stepping stone towards Aintree, as he is not entered at Cheltenham. This will set him up nicely.”

He added: “When you look through his form, a lot has been right-handed, but I think a flat track helps as much as anything and that’s why we decided a long time ago we would make Aintree his spring target over Cheltenham.

“I want to go three, but I suppose we will enter him over two and a half and three.”