Ballydoyle 'has the ammunition', Ten Sovereigns in fine fettle 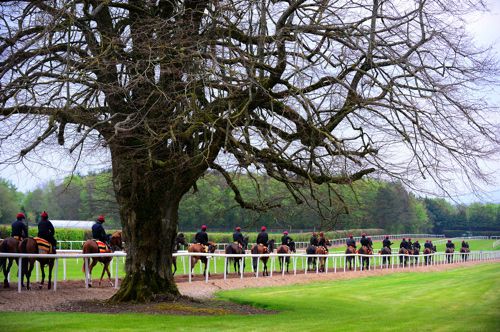 Aidan O'Brien reports 2,000 Guineas candidate Ten Sovereigns to have done well physically during the winter as the Champion Trainer believes he has the ammunition to succeed in the coming months.

Speaking at a press day at Ballydoyle on Monday morning, O'Brien said “we think at the moment we have ammunition but it is moving and changing all the time. You have to have them performing but we are hoping we are on the right track.

“We have 200 riding out in total, 100 are two year olds and we have 10 to 12 older horses and the rest are three year olds. That is our full capacity but it is very manageable.

“Last year the horses weren't able to acclimatise as there was snow early in the year and it became very warm during the summer. Not once were the horses galloped on grass last year from January to December. This year we have done a lot of grass work already.

“The first weekend in May is usually the first time we hope to have them in good order and other than that, the idea is to start and see where we are.”

Regarding the upcoming English 2,000 Guineas, the 21-times Champion Irish Flat Trainer said “Ten Sovereigns physically has done well and he is a very relaxed horse. Nothing would suggest he wouldn't get a mile.

“We will skip the Greenham Stakes at Newbury as there is no point taking on Too Darn Hot when he isn't fully ready and he will go straight to the 2,000 Guineas.”

O'Brien intends having his first runners at Chelmsford on Thursday where he is hoping U S S Michigan can win en route to a possible tilt at the Kentucky Derby.

“I'm not yet sure if a win in Chelmsford would be enough to get him in to Kentucky but he is a big, long striding cruiser and we always thought he would get a mile and further.”

Sergei Prokofiev has already won impressively for the Ballydoyle maestro this new season and he reported “Sergei Prokofiev is a very fast horse, as fast a horse as I've ever had. He was a three year old running against older horses with a penalty at Naas and won. It is the way he comes through his race; he is very fast and is a five furlong horse but won't stay six furlongs."

“I'm very happy with Japan and Mt Everest, a beautiful moving horse, has done extremely well physically. I was very pleased with Broome winning at Leopardstown and Anthony Van Dyck is another Derby horse and will run in a Trial first. Old Glory and Norway are other horses who will run in Derby Trials.

“Goddess is just coming back into full work. She was a bit sick last year and didn't get back to run. I don't think she will be back ready to run in the Classics and if you asked us now, I'd say not. She will probably be looking at Royal Ascot and have a run before it.

“The Ascot Gold Cup is the big one for us mid-season and Capri will step him up in trip and go the staying route and we'll. Kew Gardens will go the 1m4f route first before running in the Coronation and then the King George.”

O'Brien gave a full, frank and very open interview to the assembled press group, who were given access to the Ballydoyle office, and said “I look forward to coming out to the horses every single morning and every morning is different and new. I don't have any other interest, not another thing. This is my golf and everything rolled into one.

“The only other time I'm not here is at the races for a few hours; you need every minute of the day to get it all together and you need to stay as fresh as you can the whole time. I work through the day first and would take time in the evenings to relax but you have to keep yourself fresh and clear to get the information straight away to make a decision about something.

“At the time we would be happy we made those decisions but it can be a stress related thing by pushing too hard here or there. Things are caused by a line of circumstances and I would think back and we'd change those things and try not to let it happen this year.

Regarding Ryan Moore's position as stable jockey he stated “we've brought over Ryan (Moore) more this year to help him to get to know the horses more. I am conscious he has a young family and I don't want to be dragging him over too much but it is good to get a feel for the horses, although to really know the horses you have to ride them in races.

“Every horse carries a heart monitor during exercise, which Tom Curtis oversees. From that he can tell which trip a horse might prefer and can tell what stallion a horse is by. Galileo, for example, has a very large heart and a huge set of lungs and Tom can tell which horses are sired by him as he has passed those traits on to his progeny.

“It's all about the people, the riders and you're kidding yourself if you think otherwise.”