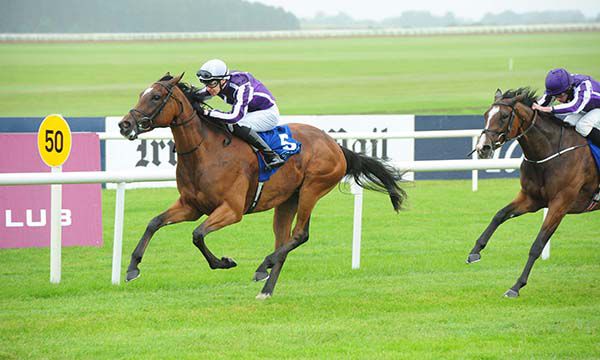 Racegoers at the refurbished Curragh are in for a treat as Magical Latrobe and Flag Of Honour take each other on in a fascinating Coolmore Highland Reel Irish EBF Mooresbridge Stakes.

Just four go to post for Monday's Group Two, which Aidan O'Brien has dominated since 2010.

Only Dermot Weld's subsequent Champion Stakes winner Fascinating Rock in 2015 has prevented a Ballydoyle clean sweep - with the likes of Camelot, Minding and So You Think on the recent roll of honour.

Magical, of course, pushed Enable all the way at the Breeders' Cup and has entries in most Group Ones in the first half of the season, over trips ranging from a mile to 12 furlongs.

She looked as good as ever on her return to action at Naas, beating stablemate Flag Of Honour comfortably in the Alleged Stakes.

Flag Of Honour is likely to come into his own over further than this 10 furlongs, given he won the Irish St Leger last season.

Latrobe won the Irish Derby for Joseph O’Brien last summer, and has nine lengths to find on Magical from the Alleged but was staying on nicely and is expected to strip much fitter with a run under his belt.

"He is in good form at home and he ran well in his first run this year," said Joseph O’Brien.

"We think he has come forward from that. It is a very hot race again, and hopefully he will run well again.

"It is competitive, because Magical and Flag Of Honour are top class.

"He ran very well in Australia, just beaten in a Group One, then he went to Hong Kong and things didn’t work for him. But he ran a nice first race of the year, and we are looking forward to tomorrow.

"We will play it by ear regarding trip for him, after tomorrow’s race."

The fourth and final runner is Jessica Harrington's The King