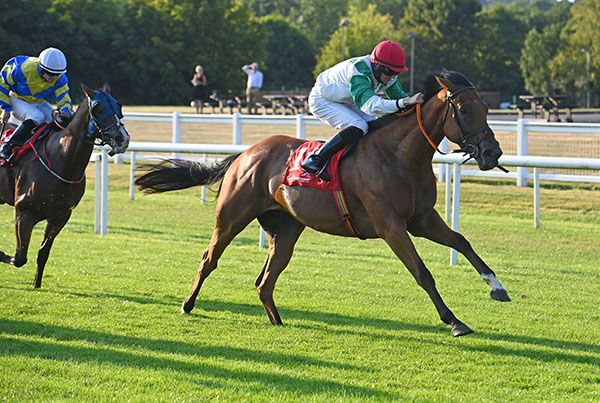 A 1,000gns juvenile purchase, unraced, from trainer William Haggas last December, Hastily today scored at the fifth attempt, under Joe Doyle, when beating runner-up Chicago Lightening by a length and a half.

It was McGuinness' second winner and said “I have four horses, three ran tonight and she had no shoes.

“This season I've trained them all without shoes as we had a lot of trouble with cracked feet. There is a lot of maintenance and pitfalls with shoes and they're definitely healthier without them. That filly ran to form.”

He added “they're not allowed do it in England but I've studied guys in Australia and they train on the beach, in the water and on the sand. The horses are conditioned and are healthier without them - their feet are rock hard.

“There has been a lot of research done in England and they claim to have done a scientific study on it but it is debated. I don't agree that horses slip without them but I don't know if I'd run a chaser in mid-winter without shoes. But I've never seen a flat horse slip without shoes.”

Regarding Hastily he said “she is green, learning on the job and Joe (Doyle) gave her a peach. She was free the last day and he covered her up for the first half and that was the crowning of her.

“I was only watching the winner so don't know where (stablemate) Coffeemeanscoffee finished!”