Battaash and Blue Point rematch one to savour 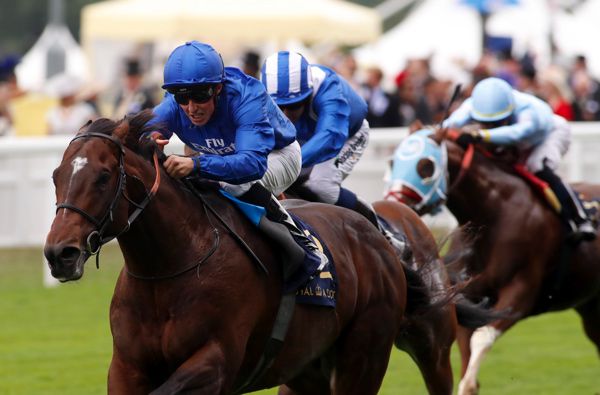 Charlie Hills is optimistic Battaash will produce his brilliant best in the King’s Stand Stakes at Royal Ascot today.

The rapid son of Dark Angel is close to unbeatable over five furlongs on his day, but has struggled for consistency over the last couple of seasons.

After cutting out much of the running in this Group One contest 12 months ago, the five-year-old’s early exertions took their toll late in the piece and he was ultimately unable to resist the late surge of Charlie Appleby’s Blue Point.

The pair engage in what promises to be a mouth-watering rematch on the opening afternoon of the summer showpiece meeting in Berkshire, with Battaash the marginal favourite to gain his revenge, having looked better than ever when making a successful reappearance in the Temple Stakes at Haydock.

“We’ve been really pleased with him since Haydock. We’ve had no problems and the ground looks like it will be perfect,” said Hills.

“I couldn’t be happier with him, to be honest. He seems to be in a good place mentally and physically this year, and is really enjoying himself.

“We’re looking forward to running him.”

The Lambourn handler has an interesting second string to his bow in Equilateral, who was last seen finishing a close-up third in the Palace House at Newmarket in early May.

The trainer added: “I think he has a good each-way chance, to be honest.

“He wasn’t far behind Mabs Cross (at Newmarket), who was third in this race last season.

Blue Point returns to defend his crown having won each of his three starts in Dubai earlier in the year.

“Blue Point did nothing but thrive in Dubai over the winter, with the highlight being his victory in the Al Quoz Sprint on Dubai World Cup night,” Appleby told www.godolphin.com.

“We have always felt that the stiff five furlongs at Ascot is his best trip and he seems to bring his A-game to the course.

“It looks like it is going to be a great race and another strong renewal, but we are very happy with Blue Point.

“In an ideal world, the sounder the surface the better for Blue Point, but he has won on good to soft at Ascot in the past and should be fine on the forecast ground.”

Mabs Cross was only beaten two lengths into third a year ago and has run two fine races so far this season — winning the Palace House before placing third behind Battaash at Haydock.

Trainer Michael Dods is confident his star mare can make her presence felt again in a race that is part of the Qipco British Champions Series.

He said: “Battaash was incredible at Haydock and if that horse turns up, then he is going to run a massive race. Blue Point has done well out in Dubai, probably at a lower level, but he couldn’t have been more impressive, could he?

“It’s a tough race and we are fully aware we are up against two very good horses in those pair, plus we don’t know what this American horse (Imprimis) is like with Frankie (Dettori) on.

“Mabs Cross is well and I’m sure she will again perform well.”

Joseph Orseno, who trains at Gulfstream Park in Florida, is relishing the opportunity to saddle Imprimis — who has won seven of his nine starts.

He said: “I’m not real familiar with Battaash and Blue Point. I have watched videos of them and it’s a tough race with good competition, but Imprimis is in form and doing well.

“He is coming here 100%, he’ll run his race and hopefully he shows up — we respect the opposition.

“To win at Royal Ascot would be at the top of the podium in terms of my career.”

Aidan O’Brien saddles Sergei Prokofiev and Fairyland as he bids to win the King’s Stand for the first time.

The former finished fourth behind Mabs Cross when favourite for the Palace House on his latest outing.

Speaking in a stable tour on www.attheraces.com, O’Brien said: “I was happy with his run at Newmarket. We wanted to give him experience over five furlongs against older horses and we knew it was going to be a learning experience for him, so we were happy with how he shaped.

“He should benefit from that and will hopefully show it on the racecourse on Tuesday.”