Battle on course for Ballymore 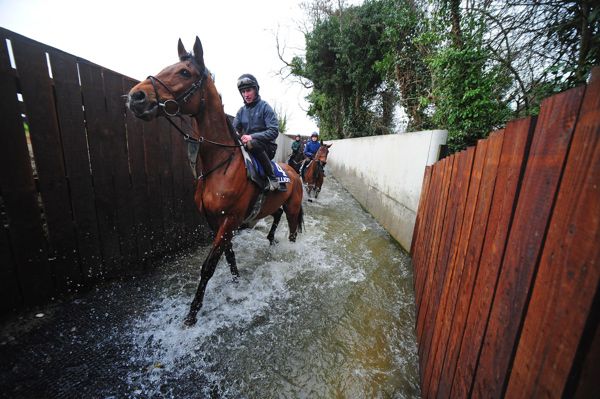 Battleoverdoyen is set to lead trainer Gordon Elliott’s raid on the Ballymore Novices’ Hurdle at the Cheltenham Festival.

The County Meath handler believes the six-year-old, who is unbeaten, will be favoured by the two-mile five-furlong test.

“I didn’t run him at the Dublin Racing Festival, because I just felt he’d had three runs in six to eight weeks,” said Elliott, at a press visit to his Cullentra stables.

“He lacks a bit of experience, but I think the race will suit him.

The three-mile Albert Bartlett Novices’ Hurdle will be the aim for Commander Of Fleet, following his Grade One success at Leopardstown over two and three-quarter.

“He won the Grade One in Leopardstown the last day, and I think three miles in the Albert Bartlett will suit him,” said Elliott.

“He ran well in the Royal Bond over two miles against a few good horses, but the trip was just too short.

“He’s a nice horse. I suppose the one negative with him is he lacks a bit of experience, but we might get a school in somewhere between now and then.”

Commander Of Fleet could be joined by stablemates Defi Bleu and Dinons.

“Defi Bleu will probably go for the Albert Bartlett as well,” said Elliott.

“I shouldn’t have run him the last day, because the ground was too quick.

“Dinons will probably go for that race as well.”

The Weatherbys Champion Bumper is the race for Envoi Allen, who has won all his starts to date.

“I think he just does what he has to do,” said Elliott.

“Everything was against him the last day — the track and the ground. The inside track in Leopardstown on good ground would be sharp enough for him.

“He’s a nice horse, but he’s a horse for the future as well. He was bought to be a three-mile chaser — and that’s what he’ll be.

“Mr and Mrs Thompson of Cheveley Park (owners) are keen to have a few runners in Cheltenham, and that’s where he goes.”

“They both run in the Supreme,” he said.

“We were riding Felix wrong halfway through the season — we were trying to drop him in, thinking he had a bit of speed, but he’s actually just a relentless galloper.

“If someone wants to go faster than him then so be it — it’s not essential he makes the running. He just wants an end-to-end gallop. He’ll go two-mile chasing next year.

“I was disappointed Vision D’Honneur got beat first time in Leopardstown, and he came out and won in Punchestown.

“Going back to Leopardstown, Jack (Kennedy) said the ground was as quick as he’d want it, and he didn’t really let himself down.

“He’s in good form at home, and I’d say in time he’s a horse who could step up in trip.”

Elliott also named three other members of his powerful string in line for Cheltenham.

Legal Steps is likely to be part of a strong team in the Fred Winter, while Dallas Des Pictons will be “the main one” of “five or six” runners in the Martin Pipe.

Sire Du Berlais is on course for the Pertemps Final.