Beauty Generation could be campaigned outside Hong Kong 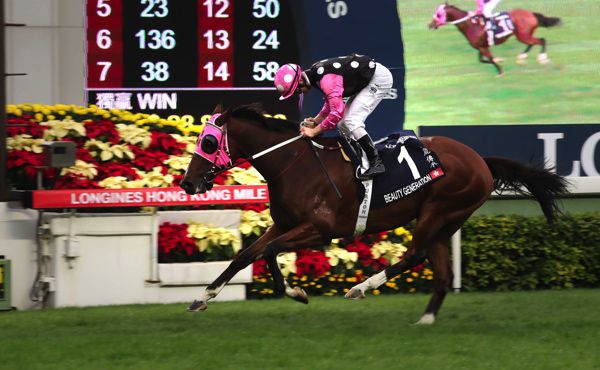 Beauty Generation could embark on an international campaign next year should all go well during his Hong Kong season.

The seven-year-old was unbeaten in eight starts during his latest term, including victories in the Hong Kong Mile in December and the Champions Mile on his most recent run in April.

Owner Patrick Kwok and trainer John Moore have so far declined to try their luck outside of Hong Kong, but regular rider Zac Purton has indicated they could be game for the challenge in the near future, with Dubai in his handler’s mind.

Purton said: “This season it sounds like the owners are keen to travel abroad, so that’s going to open up a whole new box of challenges for him and let’s just hope he’s in the same form this season as he was last season and he can do Hong Kong proud again.

“There’s excitement and anticipation at what’s going to happen

“Last season he was able to do what no horse was able to do in Hong Kong before and the fact that he did it all at Group level adds even more merit to his performances. He had track records, numbers of Group Ones, record number of wins, another Horse of the Year title, he couldn’t have done any more than he did.”

Moore is eyeing a Group Three return for his runner on October 1 and Purton reports him to be in excellent form after a four-month break.

He added: “The horse is definitely well, he looks really good, he’s glowing in his coat and his character suggests he can’t wait to get on with things.

“We’re only just over a month out from his first run and he’ll go into that race underdone, as he did last season when his class carried him through. He’ll have to give more weight away, the way the ratings are this season, so it’s not going to be an easy start for him.

“But he goes so well fresh that I’m still sure he’s going to run well. As we go towards December, John will just keep tightening the girth on him and we’ll have him peaking on the right day.”